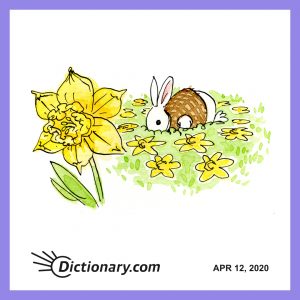 SYNONYM OF THE DAY
Double your word knowledge with the Synonym of the Day!
SEE TODAY'S SYNONYM
Load More
Apr 10 hero
Apr 12 daffadowndilly
Word of the Day Calendar

a person noted for courageous acts or nobility of character.

Why we chose hero

Heroes are everywhere right now, and we’re teaming up with Rocket Mortgage by Quicken Loans to say thank you. Share your message of gratitude with #EveryoneKnowsAHero and @RocketMortgage. Watch below to learn more.

What is the origin of hero?

The English singular noun hero is formed from the plural heroes, which comes from Latin hērōes, the plural of hērōs “(mythical) hero.” Hērōs comes from Greek hḗrōs (plural hḗrōes) “hero,” a very ancient word that meant many things to the Greeks. A compound noun trisērohei, literally “Thrice Hero,” possibly the name of a deity “Clan Ancestor (?),” appears on a Linear B tablet from Pylos, dating to the 13th century b.c. In the Iliad, hḗrōs means “warrior,” and often little more than “man,” and not a semidivine being. In later Greek, hḗrōs was a semidivine being with his own cult, usually local, the only exception being Hercules (Heracles). (Greek Hērākléēs, also spelled Hērāklês, means “Glory of Hera.” Hḗrā is the Greek feminine form of hḗrōs; she is a daughter of Cronus and sister and wife of Zeus. Her name occurs next to the name of Zeus on the same Mycenaean Greek text, which makes likely the assumption that Hera was already honored as the consort of Zeus.) Unfortunately, hḗrōs and its derivative noun Hḗrā, like 60 percent of Greek vocabulary, have no satisfactory etymology. The various etymologies proposed suffer from various degrees of improbability. Hero entered English in the 16th century.

how is hero used?

Amid all the bleak news about the coronavirus pandemic, it’s important to remember that there are so many heroes in America right now.

Every crisis has its heroes, every disaster its displays of selflessness and sacrifice. … And now, amid the coronavirus pandemic, our health-care workers, doctors, nurses, EMTs and support staff who risk becoming infected themselves—who risk infecting their own families—are making extraordinary sacrifices to care for the rest of us.

Ruth Marcus, "These are the heroes of the coronavirus pandemic," Washington Post, March 27, 2020