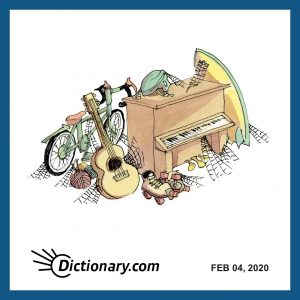 SYNONYM OF THE DAY
Double your word knowledge with the Synonym of the Day!
SEE TODAY'S SYNONYM
Load More
Feb 02 gree
Feb 04 desuetude
Word of the Day Calendar

the prize for victory.

What is the origin of gree?

The senses of the very rare noun gree “superiority, mastery; prize for victory” are either obsolete or Scottish. The Middle English spellings include gre and gree; in Middle English the word means “a step, flight of steps; victory in combat; a prize for such a victory; rank, position, dignity,” from Old French gré, grei “a step, degree.” The Old French forms are regular phonetic developments of Latin gradus “a step (literal and metaphorical), pace, stair, rung (of a ladder), tier (of seats), (musical) interval.” Gradus, a derivative of the verb gradī “to walk, step, proceed,” is the ultimate source of English grade, gradual, graduate, and degree. Gree entered English in the early 14th century.

how is gree used?

And here to win gree happily for ever …

James I, "The Kingis Quair," The Poetic Remains of Some of the Scotish Kings, 1824

A false usurper wan the gree, / Who now commands the towers and lands …