What is the origin of mizzle?

The word mizzle, both noun and verb, is dialectal and regional in the U.S. The verb comes from Middle English misellen (missill) “to drizzle,” and is related to Middle Dutch misel “fog, dew” and Dutch dialect miezelen “to rain gently.” The noun sense entered English in the late 15th century. 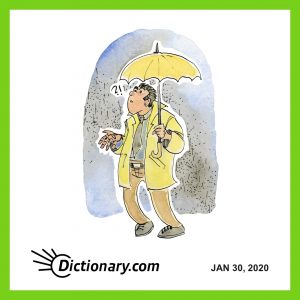 how is mizzle used?

It had started to mizzle again as a matter of course; that sunshine had been far too fragile; now it had relapsed into a suffused presence behind the ceiling of steady grey.

By the time I left the cathedral it was already dark, mizzling, the kind of rain that looks like mist but drenches you in minutes.

SYNONYM OF THE DAY
Double your word knowledge with the Synonym of the Day!
SEE TODAY'S SYNONYM
Load More
Jan 30 mizzle
Jan 28 canting
Word of the Day Calendar

something that is or is to be defined, especially the term at the head of a dictionary entry.

What is the origin of definiendum?

Definiendum comes straight from Latin dēfīniendum “to be defined.” In Latin grammar, dēfīniendum is a gerundive, a kind of verbal adjective showing, among other things, obligation or necessity. Dēfīniendum derives from the verb dēfīnīre “to fix the limits of, bound, define,” a compound of the preposition and intensive prefix dē, dē– and the simple verb fīnīre “to mark out or form the boundaries of,” a derivative of the noun fīnis “boundary (of a territory).” Definiendum is a technical term used in lexicography and logic. A similar gerundive, demonstrandum “to be demonstrated,” appears in Q.E.D., an abbreviation of quod erat dēmonstrandum, “what was to be demonstrated,” used at the end of a proof in geometry. Definiendum entered English in the second half of the 19th century.

how is definiendum used?

affectedly or hypocritically pious or righteous: a canting social reformer.

What is the origin of canting?

Canting comes from one of the senses of the verb cant, “to talk hypocritically or with affected piety.” One of the famed lexicographer Samuel Johnson’s five senses for cant is “A whining pretension to goodness, in formal and affected terms.” Cant and canting ultimately come from Latin cantāre “to sing.” Cantāre and its derivatives such as cantus “song, chant, chanting” were used contemptuously in Medieval Latin for perfunctory and lackluster liturgical chanting of the hours. In English by the first half of the 18th century, cant also meant “the singsong whining or chants of beggars; the phraseology peculiar to a particular class, party, or profession,” and “insincere, conventional expressions of enthusiasm for high ideals, goodness, or piety.” Canting entered English in the second half of the 16th century.

how is canting used?

He’s a villain in disguise; that’s my opinion of him. A low, canting hypocrite.

While conducting a petty, politically motivated trial and listening to a canting, ideological prosecutor, she looks bored and casts her glance aside.