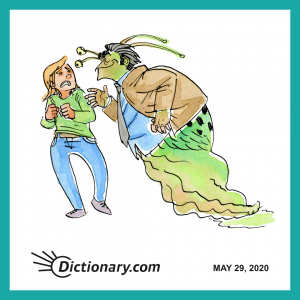 SYNONYM OF THE DAY
Double your word knowledge with the Synonym of the Day!
SEE TODAY'S SYNONYM
Load More
May 30 escapism
May 28 doover

What is the origin of doover?

Doover is an Australian slang word for thingamabob, thingamajig “something whose name is unknown.” As with many slang terms, an etymology (literally “true story”) for doover does not exist. The Hebrew noun dābhār “word, thing, matter” has been suggested as a source; an alteration of “do for (now)” is more likely.

how is doover used?

I carefully take little plastic doovers from the handle and top, and plier off the frame’s metal retainers without damaging them.

Cameron Woodhead, "Appetite for destruction: the art of smashing things and putting them back together," The Age, March 12, 2018

Well, not unlike my husband, who haunts hardware stores for ever newer and more complicated devices and doovers, I have become addicted to shops selling sewing bits and bobs.

Look it up
May 28 doover
learn about the english language

What is the origin of scilicet?

The English adverb scilicet “namely, specifically, to wit” comes from Latin scīlicet, a contraction of the phrase scīre licet “it is permitted to know, one may be sure, of course, naturally.” The infinitive of the impersonal verb licet is licēre “to be allowed,” the source of licentia “freedom, freedom to do what one wants, lack of restraint, license” (as in English). The infinitive scīre “to know” was translated into Old English as (hit is tō) witanne “That is to know, to wit,” a gerund phrase from the verb witan “to know,” which became in Middle English it is to wite “it is to be noted,” and survives in current English as to wit. Scilicet entered English in the late 14th century.

how is scilicet used?

this universal world contains other guess sorrows than yours, Viscount,—scilicet than unvarying health, unbroken leisure, and incalculable income.

Marqueray like most men kept his work and play, scilicet his political intrigues and his pursuit of Phyllida, in separate compartments.