Feedback
Previous The History And Traditions That Make Hanukkah Light Up Next What Is The Medical Term For Burping?

It’s one of the oldest words in the English language. One that’s fundamental not just to our vocabulary but to who we are as humans. And yet it’s a word that continues to be a source of intense personal importance and societal debate. It’s a word that’s inseparable from the story of 2022.

Dictionary.com’s Word of the Year is woman.

Why we chose woman as the 2022 Word of the Year

This year, searches for the word woman on Dictionary.com spiked significantly multiple times in relation to separate high-profile events, including the moment when a question about the very definition of the word was posed on the national stage.

Our selection of woman as our 2022 Word of the Year reflects how the intersection of gender, identity, and language dominates the current cultural conversation and shapes much of our work as a dictionary.

During the height of the lookups for woman on Dictionary.com in 2022, searches for the word increased more than 1,400% (a massive leap for such a common word). Subsequent spikes eventually resulted in double the typical annual search volume for the word. 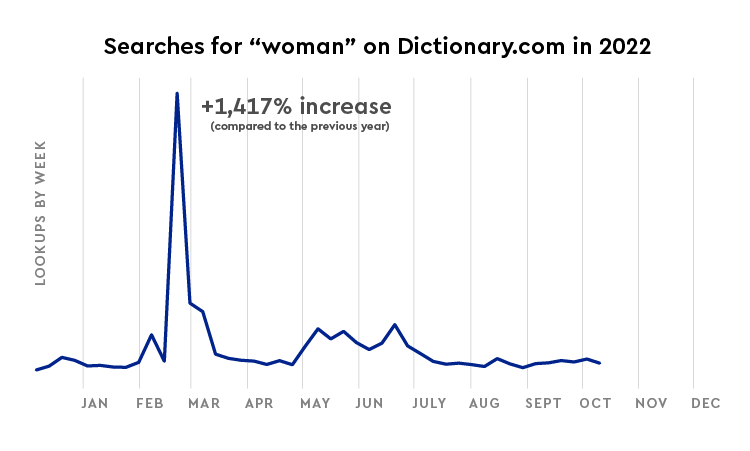 The biggest search spike started at the end of March, during a confirmation hearing for Judge Ketanji Brown Jackson, who in April became the first Black woman to be confirmed as a US Supreme Court justice. Specifically, the surge in lookups came after she was asked by Senator Marsha Blackburn to provide a definition for the word woman.

It was a rare case of not just a word in the spotlight, but a definition. We at Dictionary.com weren’t the only ones to take notice. The prominence of the question and the attention it received demonstrate how issues of transgender identity and rights are now frequently at the forefront of our national discourse. More than ever, we are all faced with questions about who gets to identify as a woman (or a man, or neither). The policies that these questions inform transcend the importance of any dictionary definition—they directly impact people’s lives.

Can you provide a definition for the word woman?

In May, a leak revealed the Supreme Court’s decision to overturn Roe v. Wade, and lookups for woman surged again (along with significant increases in searches for related terms like autonomy). Further search spikes occurred again in June and July.

In June, the court formally issued its ruling on Dobbs v. Jackson Women’s Health Organization, officially overturning Roe. The historic decision was immediately considered—across the political spectrum—to be one of the most consequential in decades, socially and politically.

Unsurprisingly, it resulted in both polarization and galvanization. That dynamic played out in November’s midterm elections, which upended trends and expectations. The outcome has been attributed in part to an electorate, and particularly women, voting in reaction to the Dobbs ruling. The election also added to the ranks of the nation’s women governors, resulting in what will be a record number of women—12—serving as governors in 2023.

The etymology of "woman"

The meaning is actually embedded right there in the roots of the word. Woman comes from the Old English wīfman, which combines the words wīf and man. The Old English word wīf meant “female” or “woman,” and is the source of the word wife (which originally could refer to a woman regardless of marital status). The original meaning of man, meanwhile, was simply “person.” The first records of the word woman in English come from as early as the year 900.

Women were also prominent in several of 2022’s other key moments and the discourse around them:

The utter variety of all these events is a reminder that one word can never sufficiently summarize or encapsulate an entire year, especially a year as relentlessly eventful, inflammatory, and inflationary as 2022. Nevertheless, 2022 will be remembered in part for its impact on women, and for women’s impact on a changing world. From our perspective as observers and recorders of language change, the word woman is a prime example of the many gender terms undergoing shifts in how and to whom they’re applied.

Our core work is making sure that the dictionary reflects how people use words in the real world. Our entries for woman and the inextricably linked word female do this by accounting for the many facets of such terms—biological, personal, and linguistic.

But the dictionary is not the last word on what defines a woman. The word belongs to each and every woman—however they define themselves.

The candidates on our Word of the Year short list reflect the role of Dictionary.com as a living resource for making sense of the terminology of complicated times. These five terms tell a story of some of the year’s most significant events and trends.

Russia’s invasion of Ukraine, the ongoing war, its countless injustices and tragedies, and the perseverance of Ukraine’s people all weigh heavily on our collective memory of 2022. One of the most visible and simple ways of expressing solidarity with the Ukrainian people has been with the Ukraine flag emoji 🇺🇦 (along with the Sunflower emoji 🌻). It’s another prominent example of emoji as a form of efficient and meaning-packed expression.

Terms related to the war and its many aspects also became some of the year’s top searches, including oligarch and sanction.

Inflation was inescapable this year, both in terms of its hard-felt effects and as a topic of discussion and debate. Our lexicographers have taken particular note of the linguistic trend—one they expect to continue—of related compound forms, including established, revived, and newly emerging terms: shrinkflation, skimpflation, greedflation, stagflation, hyperinflation, superinflation, shadow inflation, and wage-push inflation.

Several terms related to paradigm shifts in the workplace and the workforce have recently entered our vocabulary or become more commonly used, including antiwork and Lie Flat. But one that seemed to especially resonate with people this year is quiet quitting, the informal term for the practice of (secretly) reducing the amount of effort one devotes to their job.

Among the top 50 lookups at Dictionary.com this entire year was the word democracy, which came to the forefront in 2022 particularly amid discussion of its precariousness.

It’s especially interesting to us, in the word business, that the one thing that seemed to have the ability to bring everyone together in 2022 was a simple word game. Not only did we add the trademarked term Wordle itself to the dictionary this year, we also continue to see a high frequency of lookups related to the game’s answers. This is especially the case for the stumpers—i.e. the ones that take more than a trice to figure out, such as knoll, atoll, tacit, and trope. Fittingly, our Word of the Year, woman, is a five-letter word.

Past Dictionary.com Words of the Year

Previous The History And Traditions That Make Hanukkah Light Up Next What Is The Medical Term For Burping?
RELATED POSTS 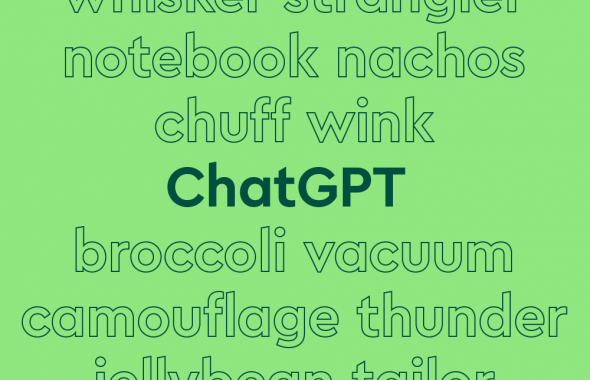