Save This Word!
n.
The erect position of the body with the face directed forward, the arms at the side, and the palms of the hands facing forward, used as a reference in describing the relation of body parts to one another.
QUIZ
QUIZ YOURSELF ON "WAS" VS. "WERE"!
Were you ready for a quiz on this topic? Well, here it is! See how well you can differentiate between the uses of "was" vs. "were" in this quiz.
Question 1 of 7
“Was” is used for the indicative past tense of “to be,” and “were” is only used for the subjunctive past tense.
true
false
TAKE THE QUIZ TO FIND OUT

What is anatomical position?

Anatomical position refers to the pose in which a person is standing upright with their face forward, their arms at their sides, and their palms and feet facing forward. The term is used in medicine and related fields when referring to the position of body parts in relation to each other.

Why is anatomical position important?

The human body has a lot of moving parts, and those parts can be in different places depending on how we position ourselves. This makes it a bit of a challenge for someone studying the body to describe the locations of body parts. That’s why anatomists came up with a way to simplify such descriptions: a default position known as anatomical position.

Anatomists use terms like lateral (on the side) and anterior (at the front) to describe positions of body parts. But those positions can change. For instance, the position of the thumb depends on whether the palm is facing forward or backward. Anatomical position solves this potential confusion by providing a standard picture of how the body is positioned so it can be described with precision. There are other positions as well. If the figure is lying flat on its back, it is called the supine position. If the figure is viewed as lying flat on its front, it is called the prone position.

Doctors, physiologists, anatomists, and biologists all rely on standardized positions like these to communicate precisely about the body. It may seem like an obvious thing, but practical standardization like this helps medicine to be practiced in a safe way and research to be consistent.

What are real-life examples of anatomical position? 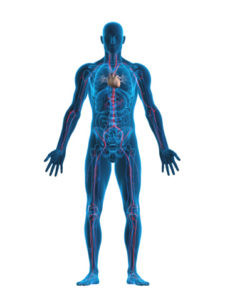 You know you're excited to be taking the last of medical classes to a medical certificate and just in general when a TV movie is on and you automatically point out a poster on the wall in the scene that's on of anterior and posterior anatomical position. 😂🤣

The Beauchêne skull, or EXPLODED SKULL, is a type of anatomical preparation invented in the C19th. The bones are separated and mounted in anatomical position, but spaced out, so that it looks like the bones are suspended in mid-air. Left is a modern example by Ryan Matthew Cohn. pic.twitter.com/gww8i0hRwT

What other words are related to anatomical position?

Which of the following descriptions is not an aspect of anatomical position?

A. The palms facing backward.
B. The feet pointing forward.
C. The head held upright with the face forward.

How to use anatomical position in a sentence