What does dwu mean?

DWU is an internet acronym  for “don’t wait up,” which literally means “don’t stay awake waiting for someone to arrive or make contact.” Don’t wait up is also casually used to mean “don’t worry about me.”

Where does dwu come from? 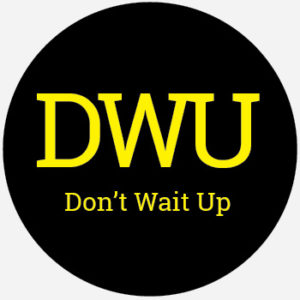 In the 2000s, people began to shorten don’t wait up to DWU in texts and social media. DWU is first listed as an acronym for don’t wait up in a 2007 Urban Dictionary entry.

The exact phrase don’t wait up (as an instruction for someone not to delay sleep until another person arrives home) appears in stories in both The London Magazine and Ambition: A Journal of Inspiration in 1913. The verb phrase wait up appears as early as 1801 in a record of the proceedings of the British House of Lords. A man is described as instructing his servants “not to wait up for him,” because he “had a key to let himself in by.”

DWU iM RiDiN GOTTA H3LL OF A LONG WAY
@RatedM_ForMolly, December 2009
Away... Searching for sanity... bbl, dwu, if you see me point me toward myself... l8r cats…
@awd, October 2007
According to Avery, her mom texted her about meeting the ball players after dropping her off, writing ‘I made some new friends. Don't wait up!
Chelsea Cunningham, KVUE, June 2017
SEE MORE EXAMPLES

Don’t wait up is common in informal speech and writing, while the acronym DWU is common in digital communication. Both phrases are often used as a playful alert that the person is going to be out late partying.

It’s not to be confused with another internet slang initialism: dwu for “dat’s what’s up.”

This is not meant to be a formal definition of dwu like most terms we define on Dictionary.com, but is rather an informal word summary that hopefully touches upon the key aspects of the meaning and usage of dwu that will help our users expand their word mastery.