What does RINO mean?

RINO stands for “Republican in Name Only,” used by Republicans to accuse other Republicans of being insufficiently conservative.

Where does RINO come from?

Literally anyone else. Trump IS the RINO.
@Martinbridge, February, 2018
Very true! We must all vote at our elections. Vote vote vote! Sitting home and not voting is a vote for a Democrat or RINO.
@SylviaNeumann18, February, 2018
...[N]ow, for a Fox host beloved of anti-immigrant populists, a RINO is a Republican who is on the other side of a disagreement with Trump, even if in substance, that means a RINO is someone who opposes a deal with Democrats to raise the debt ceiling, or stands against compromising with Democrats to get things done, which is to say, the opposite of what RINO meant in the recent past.
Conor Friedersdorf, The Atlantic, September, 2017
SEE MORE EXAMPLES

Common enough in some circles to be written like its own word (Rino), RINO is mainly used in political speech, journalism, blogging, and social media by conservatives to criticize fellow party members, especially office holders, for not being true Republicans. The charge is often issued when a Republican shows a willingness to compromise with Democrats or deviates from the party line on more hardline issues (e.g., climate change or reproductive rights). 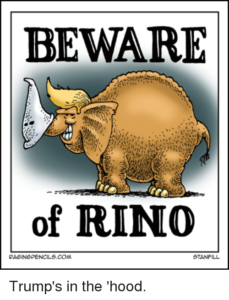 A less common Democratic party counterpart is DIABLO, or “Democrat in All But Label Only.” For whatever reason, the term DINO (“Democrat in Name Only”) has never really caught on. RINO is not the only popular use of the “in name only” acronym though. For example, the 1998 American Godzilla film is often referred to by fans as GINO, or “Godzilla in Name Only.”

This is not meant to be a formal definition of RINO like most terms we define on Dictionary.com, but is rather an informal word summary that hopefully touches upon the key aspects of the meaning and usage of RINO that will help our users expand their word mastery.