What does 👥 Busts Silhouette emoji mean?

What are you hiding in your shady past, 👥?

The busts in silhouette emoji  has many uses, including “users” of a digital interface or social-media “contacts.” But, people have come up with some darker—and more creative—meanings for the emoji’s two, grayed-out figures. These include representing a stalker or creeper and conveying something scary.

Where does 👥 Busts Silhouette emoji come from? 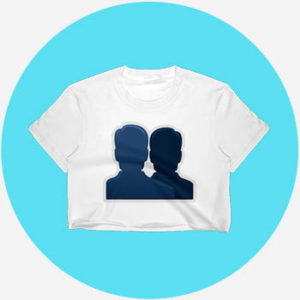 The busts in silhouette emoji—also known as the shadows, silhouettes, or users emoji—was approved in 2010 as part of Unicode 6.0. While it slightly varies in appearance across platforms, almost all designs for the emoji feature two, gender-neutral, faceless busts in shadowy blue or gray hues.

Early in the 2010s, the emoji stood for “account users” on both specialized programs and on social media. This use is probably due to the fact that many platforms, like Facebook or iPhone contacts, display a generic silhouetted bust for a user who has not selected an image or icon for their account.

Because of its connection to social media, the busts in silhouette emoji extended to one’s friends, social network, or contacts online. This use further expanded to acts like tagging, following, and retweeting on social media.

By 2017, many people noticed that, on most emoji platforms, busts in silhouette emoji looks one of the figures is lurking behind the other. This appearance inspired people to use the emoji to suggest something as “creepy,” using it to symbolize a stalker or something scary.

There are three main groups of people which influence my work [as a web designer] […]: Users 👥. These are people who USE  product. In the example of Facebook, a user would be someone who has an account.

Among software and digital internet face designers, busts in silhouette emoji is sometimes used alongside webpage content dealing with account users, user management services, members of a group, or group functionality. For instance, the software company Rabbit announced it was offering “Groups! 👥” in a blog update. Other websites employ the busts in silhouette emoji for getting connected.

In some instances, the emoji can stand for the word people entirely.

Never doubt a small group of thoughtful, committed 👥 can change the 🌎; indeed, it’s the only thing that ever has. pic.twitter.com/EyJYqMgq6W

#VaccinesWork to save and improve lives

The emoji is even used to signal a “split” in a relationship—or even of a personality.

🔮 #MOONLIGHT FAN THEORY 🔮 “many people seem to suggest the
Movie is about a split personality” 👥👤 pic.twitter.com/B6wZgeYpLd

More commonly, though, the busts in silhouette emoji means someone is acting like a “stalker” or “creeper” (slang for a person who keeps showing unwelcome interest in another):

Finally, because it’s a common trope in horror movies to show a killer creeping on their victim from behind, the busts in silhouette emoji is used in reference to horror movies and, by extension, anything scary.