What does 🌯 Burrito emoji mean?

Mmmmmm. The burrito emoji depicts a rolled up tortilla, with different platforms showing ingredients like beans and cheese poking out. (You can even discern the cilantro in Apple’s version, which looks darn delicious.) In many versions, it’s wrapped in foil–”Mission” style, named for the Mission District of San Francisco–which, if you ask us, is hands-down the best way to eat a burrito.

As you might imagine, the burrito emoji is mostly used in posts about food. Mostly.

Where does 🌯 Burrito emoji come from? 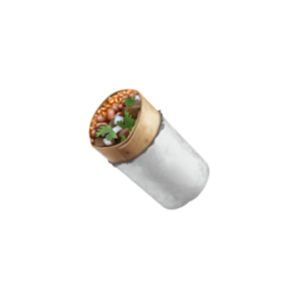 Did you know the word “burrito” translates to “little donkey?” It may be because a burrito faintly resembles bed rolls that donkeys sometimes carry. Though the burrito first appeared in Mexico, by most accounts, sometime in the mid-1800s, the Mesoamerican peoples of Mexico used corn tortillas in 10,000 B.C. to wrap food.

In Mexico, the tortillas generally convey bean and meat, and little else, but in the U.S., you might find lettuce, diced tomatoes, guacamole, sour cream, rice, cheese and a number of other items, just to ensure your post-burrito-eating experience makes you feel as full and uncomfortable as possible. In a good way.

The burrito emoji kept food good company when it was approved as part of Unicode 8.0 in 2015: it made its debut with the taco, hot dog, popcorn and cheese wedge.

Who doesn’t love Mexican food? We needed the burrito emoji almost as much as we occasionally need the real-life, three-pound, perfectly mobile culinary delight.

Of course, the burrito emoji is used in posts related to all kinds of Mexican food and culture. In texting, it’s occasionally used as a sexual reference, giving the eggplant some time off as a stand-in for a penis. You didn’t know that, right? We didn’t think so.

Why have one burrito when you can have two right?!
Are you team steak & carnitas or team chicken & chorizo? 🌯#eatburritos pic.twitter.com/GGVeWjRHlT

I look p good for someone who just swallowed a burrito whole 🌯 pic.twitter.com/EHdBCpa3V7

It can be used in posts about things that are definitely not burritos, but that are rolled up:

Is anything better than a pizza burrito? 🌯 pic.twitter.com/7JOvy5S1Kd

The best schwarma in the Precinct 🌯 pic.twitter.com/ImRKJscqo0

And the emoji appears regularly in posts about things that are both rolled up and cute… really cute.

This is not meant to be a formal definition of 🌯 Burrito emoji like most terms we define on Dictionary.com, but is rather an informal word summary that hopefully touches upon the key aspects of the meaning and usage of 🌯 Burrito emoji that will help our users expand their word mastery.