What does 🍔 Hamburger emoji mean?

The Hamburger emoji 🍔 depicts a typical cheeseburger on sesame buns with lettuce and tomato. This emoji is popularly used in various content dealing, of course, with eating different types of hamburgers, especially on National Hamburger Day on May 28. The Hamburger emoji 🍔 is also used in discussing popular foods and eating more generally.

Where does 🍔 Hamburger emoji come from? 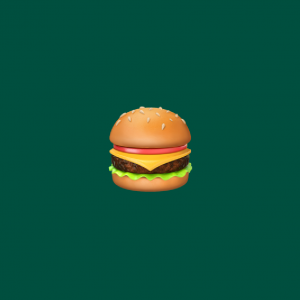 Do you know the all-American hamburger is probably not an American invention? The beef patty (usually pan fried or cooked on a grill and then topped with lettuce, onions, tomatoes, and condiments like mayonnaise or ketchup) is believed to ultimately come from Hamburg, Germany.

First, in 1758, the “Hamburgh sausage” appeared, a sausage served on warm bread, and later, in the mid-1800s, roasted beefsteak appeared on a warm bread roll.

The first American version of a hamburger may have been served by Louis Lassen of Louis’ Lunch in 1900 in New Haven, Connecticut. There are a few other claims that put the burger on American plates slightly earlier than 1900.

The first hamburger chain restaurant? White Castle. And the first McDonald’s location opened in California, way back in 1940.

The Hamburger emoji 🍔 was approved as part of Unicode 6.0 in 2010. Despite the emoji’s official name, most major platforms depict a classic cheeseburger on sesame buns with lettuce and tomato. The layering of those toppings has been subject to some popular controversy. An early Google version once had the cheese underneath the patty; it was corrected after the internet chastised Google for getting it wrong. Apple and WhatsApp place the lettuce under the patty.

Of course, the simple hamburger is one of America’s favorite foods, especially when you’re in a hurry or need something pretty portable to eat on the go. So, of course, the Hamburger emoji 🍔 appears in all kinds of food posts, and is often paired with other emoji depicting popular foods, such as the Hot Dog 🌭 and Slice of Pizza 🍕 emoji.

We are excited to announce that we will be a part of Tootsmas with @tootopia! You’ll find us trading on 8th & 9th of December and we may bring our Christmas burgers with us. Make sure you’re following @tootopia or visit tootopia.co.uk for location and event info. . . . . . . . #EEEEEATS #eater #eaterlondon #food #foodporn #yum #instafood #yummy #eating #foodpic #foodpics #foodgasm #foodstagram #london #foodie #lovefood #buzzfeast #foooodieee #eatfamous #eatingfamous #devourpower #certifiedgrilllover #🍔 #burger #burgers #burgerporn #hamburger #cheeseburger #biggestburgers101 #burgerorder

Don’t be surprised if you see the emoji used in posts about foods that are masquerading as hamburgers.

And, of course, you’ll see it in posts related to pop culture that relates to hamburgers, like the TV show Bob’s Burgers and The Simpsons.

My very first time at Universal Studios so of course I had to eat here!!! 🍔🍟🥤 pic.twitter.com/x69HpJyN4j

This is not meant to be a formal definition of 🍔 Hamburger emoji like most terms we define on Dictionary.com, but is rather an informal word summary that hopefully touches upon the key aspects of the meaning and usage of 🍔 Hamburger emoji that will help our users expand their word mastery.