What does the 🌭 Hot Dog emoji mean?

Where does 🌭 Hot Dog emoji come from? 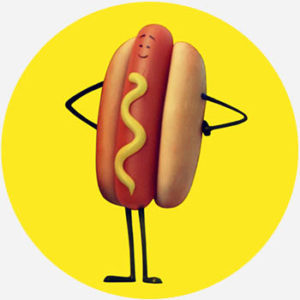 The hot dog emoji was added in 2015 in a feast of food-related emojis approved under Unicode 8.0. Across platforms, it’s topped with a squiggle of mustard but no ketchup—something @HotDogEmoji takes pride in.

Emojipedia’s in-house hot dog emoji design gets fancy with the addition of relish while Emojidex goes wild by opting for just relish and onions.

Halloween rolled around right after the hot dog emoji’s release, so naturally it spiked in time for photos of dogs in hot dog costumes as well.

While the hot dog emoji has the corner on the baseball-related social-media market, it still struggles to place in the top-ten food emoji rankings. Turns out social-media users would rather share a picture of their pizza or doughnut than their ballpark frank.

Fresh from the Twitter oven, here are the 10 most Tweeted food emojis in 2017.

The hot dog emoji is, unsurprisingly, most commonly used in reference to actual hot dogs and their non-meat counterparts. Instagram users, for instance, take the emoji literally when posting photos of meals. But, the hot dog emoji can also stand in for any fast food on social media, especially when a user is cheating on a diet.

Hot dogs are also associated with barbecues, summer time, and baseball games, so the emoji tends to pop up in these contexts as well.

Dog owners—especially of dachshunds, aka wiener dogs, and other small breeds—like to use the hot dog emoji when posting pictures of their pups in the sun. How adorbs.

Other users add or substitute the hot dog emoji when exclaiming Hot dog!, a humorously old-fashioned expression of delight and surprise.

Last but not least, the hot dog emoji inevitably gets used for “penis,” drawing on its shape and “wiener” alias.

This is not meant to be a formal definition of 🌭 Hot Dog emoji like most terms we define on Dictionary.com, but is rather an informal word summary that hopefully touches upon the key aspects of the meaning and usage of 🌭 Hot Dog emoji that will help our users expand their word mastery.