What does 🎄 Christmas Tree emoji mean?

‘Tis the season for the Christmas tree emoji 🎄.

This emoji is an image of a traditional Christmas tree, one decorated with colorful ornaments and, in most cases, a star on top. It’s used mostly in early November as the holiday season gets underway, until just past the new year in mid- to late-January.

While it might be jarring to see the Christmas tree emoji 🎄in May or August, many use it simply to reference the holiday season.

Where does 🎄 Christmas Tree emoji come from? 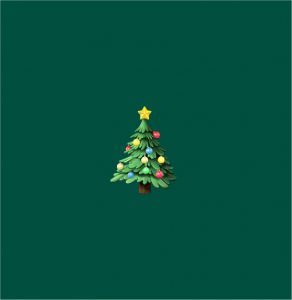 The Christmas Tree emoji 🎄 was approved as part of Unicode 6.0 in 2010 and added to the Emoji 1.0 catalog in 2015. The traditional evergreen conifer is shown with colorful ornaments, although WhatsApp has a simpler tree with ornaments in a uniform red color. On most platforms, the topper is a star, which is the most popular tree-topper, representing the Star of Bethlehem, though angels are sometimes used as well, a reference to the archangel Gabriel.

Christmas trees date back to medieval Latvia and Estonia, with the tradition becoming popular in the 1500s in Germany, where live trees were brought into homes and wooden pyramids were also constructed and decorated with apples, paper, evergreen boughs, and candles. Many believe the 16th-century Protestant reformer Martin Luther to be responsible for the tradition of adding lit candles, reportedly inspired by the twinkling stars above a treeline as he walked home one night.

Largely thought to be a pagan tradition in the New World, Christmas trees didn’t really catch on with Americans until the early 1800s.

The Christmas Tree emoji 🎄 is used to reference the holiday season, to celebrate, and to convey best wishes. It’s also used to promote holiday business and to express a sincere desire for winter and the coziness of the holiday season—even in summer.

Christmas tree & decorations down from the loft, I’d have preferred waiting another week but I’ve been outvoted, I respect democracy so the will of my house must be respected 🎄🎅

Those who can’t resist the allure of the holidays might use it both in an irritated fashion and in an impatient way, implying that the Christmas season just can’t come fast enough.