What does 🇨🇺 Flag for Cuba emoji mean?

The flag for Cuba emoji is used for all things Cuba, from its rich culture to complex politics.

Where does 🇨🇺 Flag for Cuba emoji come from? 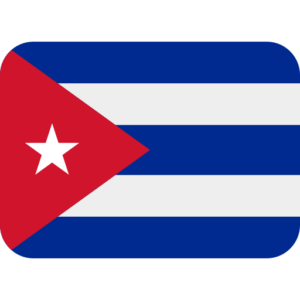 The flag of Cuba features alternating blue and white stripes with a red triangle at its hoist. On the triangle is a white, five-pointed star.

Created by Cuban writer Miguel Teurbe Tolón and general Narciso López for Cuban exiles during the mid-19th century, the Cuban flag didn’t become Cuba’s national flag until the country gained independence from the United States in 1902. In spite of a change in government in 1959 when communist revolutionary Fidel Castro came to power on the island, the flag of Cuba continued as the national flag.

The flag of Cuba made it’s way to the world of emoji in 2015 as part of Unicode’s Emoji 1.0 set. On older platforms, Cuba’s country code, CU, is displayed instead. Some platforms depict the flag as waving.

My first time 2 🇨🇺 was AMAZING💙❤️
@liljski, August, 2018
CUBAN VIBES - Trying new food is the best way to travel and I went all the way to Cuba 🇨🇺 for food. 😁What a way to experience a country without booking a ticket! I went to a Caribbean restaurant in Abuja Jerk Shack and my experience is on the blog...
@BookingsNigeria, August, 2018
Cuba's new president announced that he's pro-same-sex marriage & we're celebrating with these Cuban cuties. 🇨🇺 🌈
@MrMan, September, 2018
SEE MORE EXAMPLES

Given the long tensions between the Cuban and United States governments, the flag of Cuba emoji is often used for political purposes, such as after President Obama opened ties with the island nation in 2016 and when President Trump started closing them back up in 2017.

#UnblockCuba 🇨🇺🇨🇺🇨🇺
The government of the United States must totally eliminate the blockade
on Cuba, unilaterally and unconditionally https://t.co/F6YjUjTOXo pic.twitter.com/3zrxq694bU

On a more lighthearted note, the flag for Cuba emoji is very frequently used on social media by people showing pride in their Cuban heritage, celebrating some aspect of Cuban culture, or visiting the country.

El Malecón is Havana's famous seafront boulevard and definitely worth a stroll, especially at sunset. 🌅 Where's your favourite place to watch the sun go down? 🇨🇺 #travel #Cuba pic.twitter.com/97cdwHNwCG