What does 💪 Flexed Biceps emoji mean?

Sun’s out, 💪’s out (or out, we guess). The brawny arm of the flexed biceps emoji is used to represent all sorts of strength and power, from physical might to mental determination. The emoji especially marks posts online dealing with exercise and fitness.

Where does 💪 Flexed Biceps emoji come from?

Can't fail if you never give up 💛💪

The emoji can signify emotional strength—”powering through” a challenge.

Users might employ the flexed biceps emoji when feeling a sense of accomplishment, no matter how big or small.

Who would lead your all-time #UCL XI? pic.twitter.com/CD34umkGJP

Or when getting “pumped up” for success …

Time to get this work in 💪💪

This was the campaign to save Abu Simbel 🇪🇬.

This is the power of heritage 💪

… or signifying other ideas of building and fighting, literal and figurative.

Fantastic to see so many students joining our initiative to help Puerto Rico build back stronger.

And of course, sometimes the flexed biceps emoji can just show off the sexy guns.

And, then apparently some people think the hand looks like a sloth … it’s a thing. Google it. 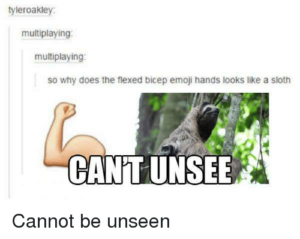