What does 👜 Handbag emoji mean?

The handbag emoji depicts a rectangular handbag with short handles and comes in different colors on different platforms, including brown, purple, and pink.

Its use relates mostly to shopping and fashion and is often used with other emoji, such as the lipstick and high heel emoji in posts related to femininity.

Where does 👜 Handbag emoji come from? 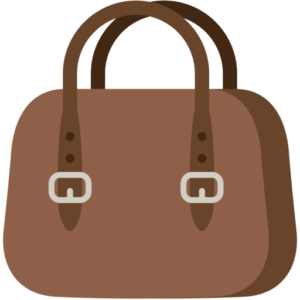 Not to be confused with an emoji that is named the purse emoji (which is actually a small coin purse), the handbag emoji typifies a medium-size bag with shorter handles, as opposed to an over-the-shoulder or across-the body type of bag. The handbag emoji was approved as part of Unicode 6.0 in 2010 and added to Emoji 1.0 in 2015.

There is also a clutch bag emoji, which indicates some real interest in the subject on the part of Unicode! Didn’t know there was a need for all three!

The More Broke A Lady Is...The Bigger Her Handbag 👜 🙌🙌🤦🤦😛😛🕺🕺🕺
@bazi_tsika, September, 2018
With all the stress this semester already has me in, especially to pass the nclex in January i am so rewarding myself with a louis vuitton purse once it is all over 👜
@TheJessica_C, September, 2018
Still in my bag like the fries at the bottom 🍟👜
@Kaleo_226, September, 2018
SEE MORE EXAMPLES

Fashionistas know the handbag emoji is primarily used in social-media posts and texts that refer to shopping and fashion.

But, it’s also used to express solidarity between women and to represent femininity, purchasing power, and bling.

Or maybe Nike should Sponsor me 💙 pic.twitter.com/HjdhbygtSQ

Let’s not forget straight-out handbag love! Some of us just love handbags.

The emoji also makes an appearance at times to illustrate woman power, which may seem somewhat out of step with feminist thinking. But, hey, whatever gets the job done!

The women of @flex360 proudly representing women in tech & marketing at @wfaphilanthropy’s 20th anniversary Power of the Purse! 👛💪👜👩‍💻 pic.twitter.com/nJ6jztuDbi

And then there’s … well … maybe a reference to “in the bag”? Emoji are totally open to interpretation, OK.

Good win vs Coventry tonight, nice to get another goal. ⚽️👜 #49 @Arsenal pic.twitter.com/RxSykBW4wG

This is not meant to be a formal definition of 👜 Handbag emoji like most terms we define on Dictionary.com, but is rather an informal word summary that hopefully touches upon the key aspects of the meaning and usage of 👜 Handbag emoji that will help our users expand their word mastery.