What does  Nail Polish emoji mean?

Aside from tagging nail- and beauty-related images online, the nail polish emoji can serve as a tone marker indicating sass, fanciness, nonchalance, or self-confidence across a variety of digital contexts.

Where does 💅 Nail Polish emoji come from? 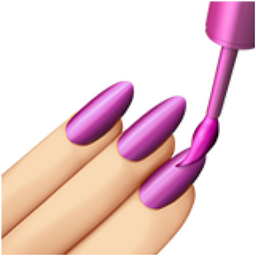 While officially known as the nail polish emoji, it is sometimes called the nail paint, nail painting, nail care, beauty, or manicure emoji.

How to get beautiful, soft feet in time for summer 💅https://t.co/LqCDid05AB pic.twitter.com/zAkBiC9bwN

Beyond its literal meaning, the image evokes a sense of regal aloofness. In March 2014, Alexander Abad-Santos and Allie Jones wrote in The Atlantic that the nail polish emoji was “the Beyonce of emojis,” and can mean “anything from shutting haters down to a sense of accomplishment; a swift ‘I don’t care’ to a spa day.”

Adam Sternbergh observed in New York Magazine in November, 2014 that the nail polish emoji had begun to mean “I’m not bothered” or “Haters gonna hate.”

Please, allow this 5 year old to teach you how to deal with an ex. 💅 💅 💅 https://t.co/hPSaOS5yk9 pic.twitter.com/fdy8SikmSs 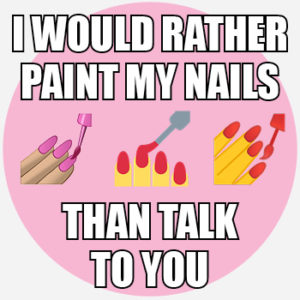 Since at least 2014, though, the nail polish emoji has been used as an emotional tone marker to communicate sass, indifference, or poise in text.