What does 🤶 Mrs. Claus emoji mean?

You can almost smell the fresh-baked cookies when you see the Mrs. Claus emoji 🤶, otherwise known as the Mother Christmas emoji. Whatever name you know her by, she represents the Christmas season.

Often described as the wife of Santa Claus, she also embodies a grandmotherly, kind-hearted, and generous woman.

While there’s no right or wrong way to write to Santa, kids can use a bit of direction with the process. Here are some pro tips straight from Santa’s mouth.

Where does 🤶 Mrs. Claus emoji come from? 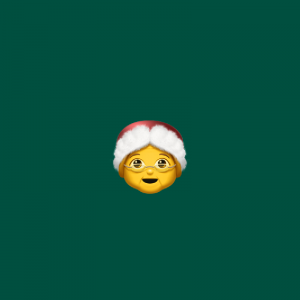 While there are variations across the platforms, the Mrs. Claus emoji 🤶 shows a smiling, white-haired woman with glasses and a red bonnet. On Facebook, Apple, and Google, details like wrinkles and shadows lend her a more realistic appearance while Samsung gives her rosy cheeks.

While her husband, Santa Claus, has been a part of Unicode since 2010, Mrs. Claus was added by the consortium in 2016 along with a group of other emoji responding to pressure about gender parity in emoji-land. Since she was added after Unicode started offering a greater spectrum of skin tones, Mrs. Claus is available in a range of colors too.

In 2020, an Mx Claus emoji was added to Emoji 13.0. Created by combining a Person emoji 🧑, ‍zero width joiner, and Christmas Tree emoji 🎄, the Mx Claus emoji is a gender-neutral alternative to Mrs. Claus and Santa Claus.

I need to change my logo—I stopped coloring my hair and now it's shocking white. 🤶
@RobinStears, September 9, 2018
We were so happy and excited to be back in school! We loved Elf Day and taking part in Christmas activities! 🎅🤶🎅🤶
@YearOneBPS, December 3, 2020

People use the Mrs. Claus emoji 🤶 during the yuletide season to express their Christmas spirit. They often use it in combination with the Santa Claus emoji 🎅 and other holiday-related emoji.

So since Santa dropped by the Christmas holiday season has officially begun! 🎄🤶🎅🏽🤶🏽
Happy Thanksgiving!!🦃🍁 pic.twitter.com/N3xpIPVp8t

Do you know people who start counting down to December 25 in January? Yes, those people will use the Mrs. Claus emoji 🤶 year-round to defiantly declare their love of the holiday.

Because the emoji can also represent any woman of a certain age, posters will use it to express their love of their grandmas, abuelas, nanas, and aunties. Others employ it to bemoan the fact that the passage of time means more grey hairs.

This is not meant to be a formal definition of 🤶 Mrs. Claus emoji like most terms we define on Dictionary.com, but is rather an informal word summary that hopefully touches upon the key aspects of the meaning and usage of 🤶 Mrs. Claus emoji that will help our users expand their word mastery.