What does 🍋 Lemon emoji mean?

This pretty yellow citrus fruit is represented here in its simplest form, a tilted, yellow oval with a green leaf or two attached to the stem.

It has several meanings, referring both to the fruit and its byproducts, like lemonade, in a literal sense, and to other representations which range from difficulties in life to love for a certain pop star. 🐝🍋

Where does 🍋 Lemon emoji come from? 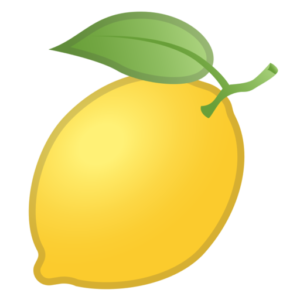 Lemons are associated with many things, including food, health, beverages, the much beloved performer Beyoncé, fabric and decorative design, and of course, the occasional bump in the road (a lemon) with which the resourceful person might make lemonade.

Since lemons are sour, the metaphor works to suggest that life is not all sweetness and ease, and when one has a difficult moment, one should make the best of it. Often attributed to self-improvement guru Dale Carnegie in the 1940s, the first to use lemons as a “bad thing,” according to Wikipedia, was one Christian anarchist writer named Elbert Hubbard, in a 1915 eulogy for a friend: “He picked up the lemons that Fate had sent him and started a lemonade-stand.”

Pucker up! Ok, lemons might cause some weird facial expressions, but in the right context, they are a delicious food item, an essential ingredient in some adult beverages, and they also make for a quite delicious decorating motif, among other things.

Spring has sprung here in #adelaide and so have the blossom trees. Inspired by the blossom was today’s afternoon tipple – a classic #ginfizz using the divine citrus-forward #boigin and lemons from a friend’s tree. ##🍋 🍸 – 60ml Boigin – 30ml Fresh Lemon Juice- strained – 20ml Simple Syrup – Egg White ✖️Shake with ice and strain. Top up with soda water #chinchin

Sometimes, all of those ideas are rolled into one earnest social-media post!

Lemon 🍋is a nice seasoning in different (fish) dishes. And fresh in a glass of water or tea or a glass of tonic. (With or without gin) I always have it at home, but will you really burn extra calories with it❓🤔 #lemon #lemondiet #burncalories #lips #nicelips #pic #photography #photo #art #artistsoninstagram #artjournal #fruit #color #yellow #yellows #food #foodporn #footfetishnation #foodie #foody #lemonjuice #lemonjuicechallenge #lemonjuice🍋 #🍋 #🍋🍋 #🍋🍋🍋

A post shared by Afvallenzodoejedat. nl (@jolandavandam_fitnessenvoeding) on Sep 6, 2018 at 7:34am PDT

The lemon emoji is often used in social-media posts about the pop star Beyoncé, ever since her 2016 album “Lemonade” was released. It’s used especially in combination with the bee emoji here.

Happy 2 year anniversary to #Beyonce's #Lemonade 🍋. This album is iconic and timeless, and has really solidified Beyoncé as a talented artist who's artistry knows no bounds! Now Playing, all day and ALL NIGHT LOOOOONG 👑 pic.twitter.com/K3GT4kJxzc

And of course, don’t forget celebrating the beauty of actual lemonade, especially when amazing people do amazing things with the zingy yellow fruit!

The emoji also illustrates the idea of “making lemonade,” i.e., when life hands you lemons (as if lemons were a bad thing …).

This is not meant to be a formal definition of 🍋 Lemon emoji like most terms we define on Dictionary.com, but is rather an informal word summary that hopefully touches upon the key aspects of the meaning and usage of 🍋 Lemon emoji that will help our users expand their word mastery.