What is the 🥮 Mooncake emoji?

The Mooncake emoji 🥮, depicts a round, golden-brown, Chinese pastry known in English as a mooncake.

A mooncake is a traditional and symbolic delicacy enjoyed during the Mid-Autumn Festival, which falls on September 21 in 2021.

Chinese New Year emoji, 🍱 Bento Box emoji, I love you to the moon and back, Lunar New Year

Where does 🥮 Mooncake emoji come from? 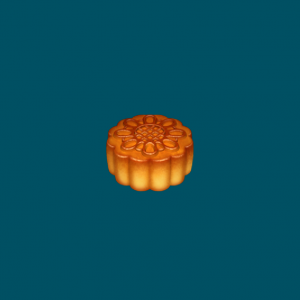 The Mid-Autumn Festival is a major holiday observed each year in East and Southeast Asian cultures around the world, especially in China and Vietnam. It starts on the 15th day of the eighth month according to the lunar calendar. In the Gregorian calendar, the festival is observed in September or October each year.

The Mid-Autumn Festival is an ancient harvest festival, historically involving worship of a moon deity associated with fertility. Today, the holiday celebrates family, togetherness, and thanksgiving, and is observed with the lighting of beautiful lanterns and the giving and eating of mooncakes, both symbols of the moon.

Mooncakes—or yuèbǐng (月饼) in Chinese—are a round pastry filled with red bean and lotus seed paste, sometimes filled with two salted duck yolks. Its circular shape resembles a full moon, which is an emblem of completeness and unity. This beloved delicacy and important symbol is what the Mooncake emoji 🥮 depicts and is intended to honor. 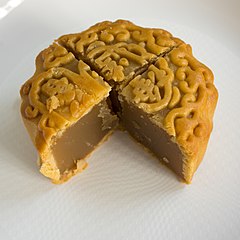 The emoji was approved in 2018 under Unicode 11.0, the same year Unicode approved two other emoji associated with Chinese culture: Firecracker 🧨 and Red Envelope 🧧 emoji, which are used to celebrate Chinese New Year. The 2017 proposal for the Mooncake emoji 🥮 observed:

Currently, the dessert emoji selection does not include any iconic Chinese desserts, while it has a lot of western and Japanese desserts. Thus the MOONCAKE emoji would be a great addition to the existing food and drinks emojis to better reflect the dessert choices enjoyed by people around the world.

For their Mooncake emoji 🥮, major platforms depict a moon cake with an ornamental design on its crust, often with a wedge cut out as revealing a yolk inside. Twitter’s moon cake features the Chinese character for “fall/autumn” or “harvest” (秋) on its crust.

We made more mooncakes 🥮 and we had leftover dough so I made cookies 😊
@mayhugs, September 8, 2019
It's the little things. 🥮 We're one week away from the #MidAutumnFestival! How are you celebrating? 🌙
@CSWSAsia, September 5, 2019
Birthday weekend #baking - chocolate brownies, and lemon cheesecake with lemon curd/ fruit topping 😋🍰🥮
@LeanneWater, September 8, 2019
SEE MORE EXAMPLES

The Mooncake emoji 🥮, true to its real-life origin, is commonly used to mark the Mid-Autumn Festival, which is celebrated in China, Vietnam, elsewhere in East and Southeast Asia, and in communities all around the world.

Which is your favorite🥮? Cantonese-style or Beijing-style? That will be the main debate ahead of the annual #MidAutumnFestival. Let’s see this year's Cantonese-style mooncakes. There will be low-sugar mooncakes and ice-cream mooncakes🥳. Do you want to try it? #FestivalinChina pic.twitter.com/lZrLmth2s9

Customers walk in a mall decorated with #lanterns which are used to celebrate the upcoming Chinese traditional Mid-Autumn Festival in Kuala Lumpur, Malaysia. 🥮🏮#MidAutumnFestival pic.twitter.com/Vx80NuIZgQ

Giving out moon cakes 🥮 at Mid-Autumn Festival in Sunset Park! Thanks to the American Chinese Commerce Association and Asian American Community Empowerment for hosting. pic.twitter.com/7W7XcYGwWy

Occasionally, it’s used to represent various types of pastries and desserts in general.

This is not meant to be a formal definition of 🥮 Mooncake emoji like most terms we define on Dictionary.com, but is rather an informal word summary that hopefully touches upon the key aspects of the meaning and usage of 🥮 Mooncake emoji that will help our users expand their word mastery.