What does 🦪Oyster emoji mean?

The oyster emoji, 🦪, depicts that pearl-yielding mollusk, the oyster. It may be used to represent oysters as an organism and food as well as the precious pearls they produce.

It may also be used for figurative oysters or pearls (e.g., the world is your oyster, pearls of wisdom).

Where does 🦪 Oyster emoji come from? 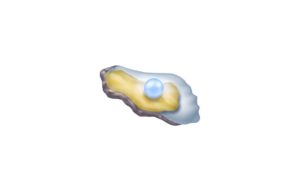 Oyster is the name we give to a number of salt-water, bivalve mollusks that live in calcified shells in the ocean. Via French and Latin, the word oyster ultimately goes back to the same Greek root (concerning “bone”) that yields the prefix osteo- and verb ostracize … if you’re into words and stuff.

For thousands of years, oysters have been prized by humans both as a food substance and for their pearls. In some instances, oyster shells are also prized for their lovely color (although that doesn’t apply to all oysters).

Approved under Unicode 12.0 in 2019, the oyster emoji, in its releases so far, generally shows an open white or gray oyster shell with yellowish flesh and a small pearl in it. On unsupported platforms, the emoji displays as an empty box. 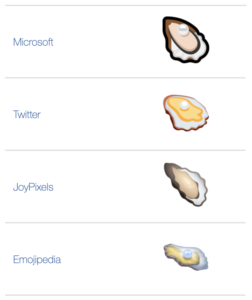 Just as the eggplant emoji 🍆 became repurposed for male genitalia, some people (such as Jael Goldfine put it in Paper magazine in February 2019) have supposed the oyster emoji 🦪 may be taken up for the female counterpart.

As of 2019, the oyster emoji is still fresh so evidence for its specific applications are only emerging.

… and an important organism.

Certain types oysters are prized for the pearls they produce, so expect to find the oyster emoji in contexts referring to those precious objects (e.g., jewelry, pearl of wisdom).

The rare pearl one may discover inside an oyster gave rise to the expression the world is one’s oyster, or “life’s opportunities are available to you.” The oyster emoji is a perfect punctuation to the sentiment.

This is not meant to be a formal definition of 🦪 Oyster emoji like most terms we define on Dictionary.com, but is rather an informal word summary that hopefully touches upon the key aspects of the meaning and usage of 🦪 Oyster emoji that will help our users expand their word mastery.