The person kneeling emoji, 🧎, depicts a person on their knees, as if praying or resting. 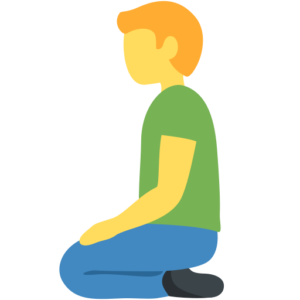 The person kneeling emoji was approved under Unicode 12.0 in 2019. The March 2018 proposal to Unicode for the person kneeling emoji also suggested the additions of a person standing (which won approval as🧍) and person sitting (which became represented in chair 🪑) to join person walking🚶 and person running 🏃 “to complete a full set of basic human behaviours associated with stillness and motion.” 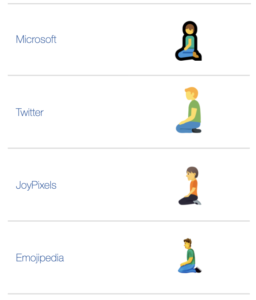 On unsupported platforms, person kneeling emoji may display as an empty box. 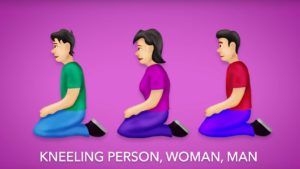 As the person kneeling emoji is young, it hasn’t gotten its legs yet …

As person kneeling emoji becomes more familiar on our emoji keyboards, expect the emoji to be used as a gesture of respect or worship, especially in a religious sense akin to place of worship emoji, which depicts a figure one their knees praying 🛐.

A woman not paid for land taken from her to build road kneels before Jokowi during toll road inauguration 🧎‍♀️ https://t.co/RwcgfU1XZK pic.twitter.com/oodTwJkQIM

Kneeling is a position also assumed in other activities, from sports to exercise to resting to … more adult endeavors. Expect to find person kneeling applied to such contexts.

Yoga is that Journey which takes you to your real Self👍, to your Soul, through your own Self🧍. 🧎‍♂️🧍‍♂️
Wishing You Happy 😍 International Yoga Day 2019 !!#yogaday #yoga #yogainspiration #yogalove #yogalife #yogaposes #yogapractice #yogalover #yogaeverydamnday pic.twitter.com/fJL6IhWeI3

The person kneeling emoji may also be used in the context of various knee-related expressions (e.g., on one’s knees, take a knee, etc.).