What does 🥧 Pie emoji mean?

The Pie emoji 🥧 depicts either a slice of pie or a round pie in a dish, showing a golden crust and sometimes wisps of rising steam. While it’s a popular emoji for referring to food-related topics (especially those involving dessert), the Pie emoji is also used on Pi Day, which is celebrated March 14. Mmmmm. Pie.

Speaking of desserts, what is the difference between pie and cake, anyways? And is cheesecake really a cake?

Where does 🥧 Pie emoji come from? 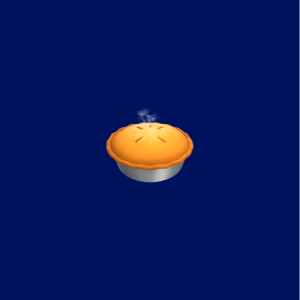 It’s unclear whether the Pie emoji 🥧 is sweet or savory, as the images range from a slice that exposes a rich red, cherry filling to a slice of traditional pumpkin pie with a dollop of creamy whipped topping to a slice with no filling at all.

The Pie emoji 🥧 is often used with other emoji that refer to food, especially desserts, but it’s also paired with emoji that represent the fall season, since fall is a big time for pie.

Have you wanted to pie a Phi Mu? Well now is your chance!! Come to Riseman Plasa this Thursday! 🥧 all benefits going to CMNH!! pic.twitter.com/VBvXbAwdLQ

The Pie emoji 🥧 makes a humorous appearance every year on Pi Day (March 14, because 3.14). The day celebrates the mathematical concept pi, or the ratio of the circumference of a circle to its diameter.

CHS is celebrating Pi Day today! 🥳 Head over to our CHS official Maths page @chs_maths for some more information on what ‘pi’ is, why we celebrate pi day and some fun pi challenges 🥳 🥧 @ChertseyHSMaths pic.twitter.com/R3u0K7jEFP

This is not meant to be a formal definition of 🥧 Pie emoji like most terms we define on Dictionary.com, but is rather an informal word summary that hopefully touches upon the key aspects of the meaning and usage of 🥧 Pie emoji that will help our users expand their word mastery.