What does 🌈 Rainbow emoji mean?

The rainbow emoji 🌈 depicts a colorful arc of a rainbow. When not representing the meteorological phenomenon, the emoji can express various positive emotions, such as happiness, feelings of togetherness, hope, and good fortune. Along with the rainbow flag emoji 🏳️‍🌈, it’s commonly used to express LGBTQ identity and pride.

Where does 🌈 Rainbow emoji come from? 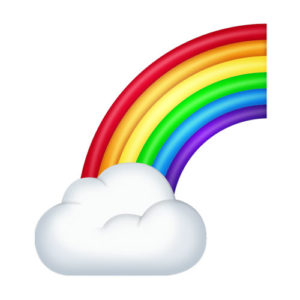 The rainbow emoji was added to Unicode 6.0 in 2016. Apple first implemented the emoji under iOS 2.2 in 2008 for iPhones in Japan, where the cell phone carriers SoftBank and au by KDDI had featured early versions of the emoji since 2000 and 2003, respectively.

Across major platforms, the rainbow emoji displays as an arc with most of the traditional colors of the rainbow: red, orange, yellow, green, blue, and violet. Sorry, indigo. Facebook, however, does include an indigo band in its design, displayed in a blue sky. WhatsApp’s design has the rainbow emanating from a white cloud. 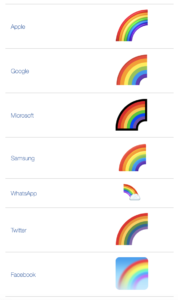 With its diverse colors coming together into one, the rainbow has been a symbol of LGBTQ pride since 1978. That year, San Francisco politician and iconic gay rights activist Harvey Milk commissioned Gilbert Baker, a drag queen and US military veteran, to create a new flag to represent the LGBTQ community.

Live from my sister’s wedding 🌈💖🏳️‍🌈 #LoveIsLove
@ZoeBijl, May 2019
happy Monday,stay positive!!!! May the week be in your favour!!!! take time to treat yourself! ✨🌈🌤🍦❄️✨🍯
@jherinedavid, February 2017
We are enjoying this beautiful Friday at @WilliamBerczyPS by taking playful learning outside with @ourkinderworld #YRDSBEarlyYears 🌳🌈☀️
@team110den, May 2019
SEE MORE EXAMPLES

The rainbow emoji is often used, of course, when commenting on pictures of rainbows …

You know it's going to be a good day when … 🌈❎2️⃣ pic.twitter.com/f8cTkEmGsM

… or other moments of natural splendor.

Given that they are beautiful and special, rainbows, including in their emoji form, can express various positive feelings, such as happiness and togetherness.

Rainbows also figure prominently in myth and story. They are associated with luck, thanks to Irish tales of leprechauns hiding pots of gold at the end of rainbows. In the Judeo-Christian tradition, rainbows are associated with hope, as God issued a rainbow after Noah’s Flood as a covenant never to destroy life. These associations may also come into play in uses of the rainbow emoji.

goodluck on your future guys 👏🏻 see you when i see you 🌈✨ i’m gonna miss you guys for sure 😭 pic.twitter.com/3HBPWaIAFX

I never had enough validation growing up…I turned to God but did not find him in the world. After many years of seeking, soul searching and taking accountability His Fruit is beginning to blossom within me.💜🌺🌈🙏 pic.twitter.com/Rixn7DYi6Z

This is not meant to be a formal definition of 🌈 Rainbow emoji like most terms we define on Dictionary.com, but is rather an informal word summary that hopefully touches upon the key aspects of the meaning and usage of 🌈 Rainbow emoji that will help our users expand their word mastery.