What does 💤 Sleeping Symbol emoji mean?

The Sleeping Symbol emoji 💤 depicts three, generally blue Z’s increasing in size as they rise to the right. It is variously used to represent sleeping, dreaming, snoring, tiredness, exhaustion, or boredom.

Where does 💤 Sleeping Symbol emoji come from? 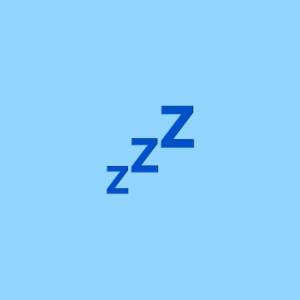 Sleeping Symbol emoji 💤 , popularly called the Zzz emoji, was added to Unicode 6.0 in 2010. On most major platforms, the Z‘s in the emoji are blue or light blue, although Facebook’s design is purple.

The emoji represents ZZZ or zzz, used to represent sleeping and the sound of snoring. The onomatopoeia of three Z‘s have been used as a visual convention for sleeping in comics and animations since at least the mid-20th century. What is the connection between Henry David Thoreau and ZZZ? Discover the answer in our Vocab Builder on ZZZ.

The Sleeping Symbol emoji 💤 emoji sees especial use on the unofficial holiday of National Lazy Day—which, while we wish it were every morning, falls on August 10

Lions can sleep for up to twenty hours a day 💤💤 It seems fitting that today is both #WorldLionDay and #NationalLazyDay! 🦁 #FridayMotivation pic.twitter.com/moB054bVGf

i blacked out half way down and kendall borderline broke her face @kendalljenner 💤👋🙅👭🐬🐬🐬🐬
@leebellahadid, Instagram, May 2015
We is tired now mummy! 💤💤 #kittyloafmonday #tunatuesday
@Crysd3, November 30, 2015
Kisses for a sleepy winner having a Saturday snooze in the sun Sun with rays Face throwing a kissSleeping symbol ☀️ 😘 💤 ...
@k_woollacott, September 26, 2020
SEE MORE EXAMPLES

The Sleeping Symbol emoji 💤 is often used to convey tiredness or exhaustion and signal one is going to bed. It is used very similarly—if not identically—to the Sleeping Face emoji 😴.

And that's a wrap on the 2016 Met Gala. What a night! Big day tomorrow…we start shooting Girls Season 6, and there's something else exciting that I'll tell you about in the morning 😉❤️ Goodnight!! 💤💤💤

People also love to use the Sleeping Symbol emoji 💤 in pictures of sleeping babies and animals.

We also like to say dreadfully uninteresting things or dull people put us to sleep—they are real snoozefest. In this way, the Sleeping Symbol emoji 💤 can signal boredom or tedium.