What does 🦥 Sloth emoji mean?

Better slow down to appreciate this one!

The sloth emoji, 🦥, depicts a sloth, generally shown hanging from a tree branch. When not used for the adorable creature, the emoji may be used to indicate slowness or laziness.

Where does 🦥 Sloth emoji come from? 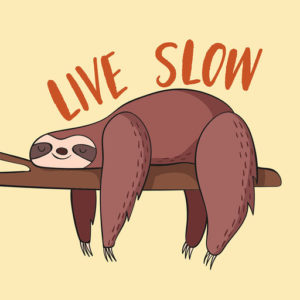 Sloths are shaggy creatures found in the forests of South and Central America and being slow is what sloths are best known for. They also spend most of their time hanging around in trees in the rainforest eating. Not too shabby.

The word sloth in English is attested by the 12th century for “sluggishness” and “laziness.” It’s an old noun form of slow. Just as long became length or true truth, slow became … sloth!

In the Christian tradition, sloth is considered one of the seven deadly sins. Sloth became the name for the animal by the 1600s.

The sloth emoji was approved under Unicode 12.0 in 2019. Appropriately enough, the tail-less, big-eyed sloth is (so far) depicted hanging from a tree branch in the sloth emoji. On unsupported platforms, the emoji may appear as an empty box. 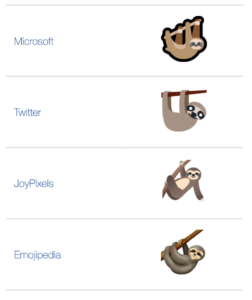 As of 2019, the sloth emoji is new, so evidence for its specific applications is emerging … gradually.

Of course, expect the sloth emoji to be used of the creatures themselves, popular and beloved as they are.

#The100 news have been slow like a 🦥 In case you cannot see that emoji, it's a sloth. But… pic.twitter.com/3Il7mqgRuq

And, because of associations with the animal, also expect to see the sloth emoji used on social media and in texts to symbolize laziness or taking it slow and easy.

🦥 Sloth Emoji https://t.co/IOQPU5D3vj if only I could think of someone to use it on. @senatorshoshana

This is not meant to be a formal definition of 🦥 Sloth emoji like most terms we define on Dictionary.com, but is rather an informal word summary that hopefully touches upon the key aspects of the meaning and usage of 🦥 Sloth emoji that will help our users expand their word mastery.