What does Smiling Face With Heart-Shaped Eyes emoji 😍 mean?

All the meanings for the smiling face with heart-shaped eyes emoji are very positive and warm. This emoji is associated with adoration, love, or extreme positivity toward a specific subject (romantic or not).

And, it can even be directed at inanimate objects—a chia smiling face with heart-shaped eyes emoji pet (that’s a mouthful), what could be more positive than that?

Where does 😍 Smiling Face With Heart-Shaped Eyes emoji come from? 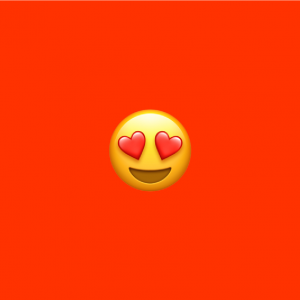 While this emoji was called smiley face with heart-shaped eyes when it was originally approved by the Unicode Consortium in 2010, it has since been officially renamed smiling face with heart-eyes. Every meaning associated with the smiling face with heart-shaped eyes emoji is positive. It usually serves as an overwhelmingly happy response to a subject. This could be a person, a place, a thing, or even just a concept. No matter the object that warrants this emoji’s use, it pretty much functions as a shorthand for “I love this.” The hearts in its eyes say it all.

When this emoji is directed at people, it’s often because the person using this emoji greatly admires them. It could appear on retweets of a particularly poignant celebrity quote. Non-romantic love in general favors this emoji. It’s a fantastic way to cheer people on and let them know they’re cared for. One way to do this is to use it in response to a particularly beautiful picture. It could be part of a comment on a really well-framed selfie on social media. It could also be about how much the commenter loves an outfit, makeup, outfit, hairstyle etc., be it their own or someone else’s. It may also be used when romantic love is involved and someone wants to express how much they adore their partner, since hearts often carry such a meaning.

The smiling face with heart-shaped eyes emoji is also great for reactions to animals, landscapes, and foods, just to name a few more categories. For example, if someone saw a really cute dog, they might use this emoji along with an exclamation about how adorable the dog is. They could also use it in an instance where they love something so much that they want it for themselves. People also favor it when reacting to pictures of a baked good or meal, or scenery from a beautiful place, which they might want to experience firsthand because it’s so delicious-looking or breathtaking.

This emoji is often used in responses to exciting concepts, too. Maybe someone’s favorite musician has just announced that they are coming to a fan’s city. It could also be used as a response to an inspiring quote posted on social media, or kinds words from a friend or follower.