Learn how young people who identify as transgender and nonbinary are leading the way in creating language that helps to express the nuances of their gender identity and expression.

Where does 🏳️‍⚧️ Transgender Flag emoji come from? 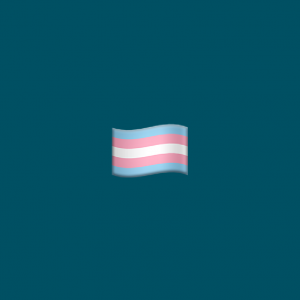 In a petition directed toward the Unicode Consortium, the group explained that they chose the lobster to express outrage of Unicode seemingly prioritizing crustaceans over transgender people in their decisions of which emoji to approve: “Unicode granted the Lobster emoji proposal, which argued that people suffered ‘frustration and confusion’ at having to use a shrimp or crab emoji instead of a lobster. Imagine if that was your gender. Surely we deserve the same rights you have afforded crustaceans?”

The group ended the petition with “Lobsters can actually be gynandromorphs (an organism that contains both male and female characteristics). So we’re going to take it as our symbol, until we get the Trans emoji we deserve.”

Transgender flag emoji and other inclusive icons will be available in 2020
Caitlin O’Kane, CBS News, January 30, 2020
I'm celebrating trans people everywhere today on this #TransDayOfVisibility. You are seen, you are heard, and you are important. 🏳️‍⚧️
@SaraGideon, March 31, 2020
As one of his first acts as Commander in Chief, @POTUS Biden reversed the ban on transgender servicemembers. All Americans who are willing and able serve in the U.S. military should have the opportunity—openly and free from discrimination. 🏳️‍⚧️🇺🇸 Inclusion makes America stronger.
@JoaquinCastrotx, January 25, 2021
SEE MORE EXAMPLES

On social media, the Transgender Flag emoji 🏳️‍⚧️ is used by transgender and nonbinary people to express pride in their community and their own gender identities. The emoji is often used in Twitter usernames.

Since trans is trending I just want to say, I am proud to be trans and others who identify as trans should be proud too! You are valid and you matter! Don’t let anyone else tell you otherwise! 🏳️‍⚧️

Join us in congratulating Dr. Levine on her historic confirmation this evening, especially as it comes just a week before Trans Day of Visibility. 🏳️‍⚧️

Representation at all levels of leadership is critical to ensure that all of our communities are seen, respected, and cared for. https://t.co/g6qPwPkvVa

Reminder that today is Transgender Remembrance Day and we need to be doing so much better as allies.🏳️‍⚧️