What are Valentine’s Day emoji?

Where does Valentine’s Day emoji come from? 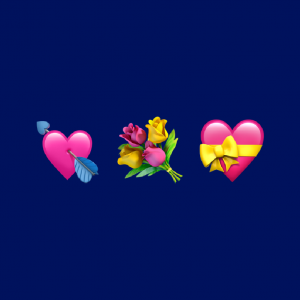 First off, let’s talk about Valentine’s Day. February 14 has been observed in the West as a celebration of love and an opportunity to exchange tokens of affection since at least the fifth century CE, when the Pope Gelasius I deemed the ancient Roman festival of Lupercalia to be too sexy and gory, replacing it with a much more tame, wholesome holiday.

Today, Valentine’s Day is generally known as a day to exchange cute cards, love letters, jewelry, and candy (gifts known as valentines, which started being exchanged around the 1400–1500s).

Swell your heart—and vocabulary—with even more tantalizing facts about about the history and meaning of the word valentine here.

Despite both widespread popularity (or, sometimes, detestation), there hasn’t ever been Valentine’s Day-specific emoji to date. This is probably because what could be a Valentine’s Day emoji also works for expressions of love year-round. The Bouquet 💐, Chocolate Bar 🍫, Love Letter 💌, Throwing a Kiss 😘, Red Heart ❤️ emoji work well on Valentine’s Day, but also on anniversaries, birthdays, special occasions, and “just because” moments. (Try doing similar things with the Jack-o’-Lantern 🎃 or Santa Claus 🎅  emoji, which are associated with Halloween and Christmas.) Perhaps, the emoji most distinctive to Valentine’s Day, though, is Heart With Arrow 💘, which makes everyone think of the holiday’s icon, Cupid.

It’s worth noting that the term Valentine’s Day emoji sees regular bursts of search interest in February every year—when, you know, people wonder if there’s a specific emoji they should be using for it.

WATCH: What Is The Origin Of Valentine's Day?

the official Valentine’s Day emoji of sad single girls nationwide: 🥀
@ravijayanath, February 14, 2018
My girlfriend is far too fertile to be near a Jean-Claude Van Damme Valentine's Day emoji.
@Seanbabydotcom, February 13, 2017

If you ever hear or see someone discussing the Valentine’s Day emoji, they’re most likely talking about emoji that could potentially be related to Valentine’s Day.

Want to play up the love aspect of Valentine’s Day? There are over 25 emoji that are heart-shaped or depict hearts, including Heart With Arrow 💘, Sparkling Heart 💖, Beating Heart 💓, and Smiling Face With Heart-Shaped Eyes 😍.

Focusing more on the gifting aspect of the holiday? There’s Love Letter 💌, Bouquet 💐, Ring 💍, Chocolate Bar 🍫, and even a Love Hotel 🏩 emoji.

Celebrating coupledom or lovey-dovey times with your partner? Whether you’re holding hands 👬 (People Holding Hands), kissing 👩‍❤️‍💋‍👩 (Kiss) and 💋 (Kiss Mark), or just hanging out with lots of feelings 💑 (Couple With Heart), there’s an emoji for that.

And oh, what’s that? You call Valentine’s Day “Singles Awareness Day”? Broken heart 💔 and Wilted Flower 🥀 emoji are here for you.

Alternatively, Valentine’s Day emoji can also refer to Twitter’s event-specific emoji, which are activated by certain hashtags and specially added into the text of a tweet during a set period of time, usually during holidays, sporting events, or major pop culture and political moments. Twitter has released limited-time, hashtag-activated emoji-like images for Valentine’s Day every year since 2017, including #LoveHappens: 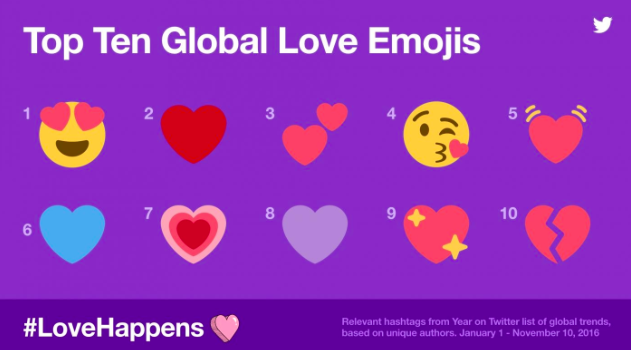 Plenty of third-party providers have released Valentine’s Day sticker packs to be used in text messages around the holiday. Some people call these Valentine’s Day emoji because they look like emoji and because companies market them as such.