The smiling emoji feels all warm and fuzzy inside. This emoji is used to express positive feelings, from happiness to gratitude to affection. Because of its rosy cheeks, some people use the emoji to convey mild embarrassment.

Where does ☺️ Smiling Face emoji come from? 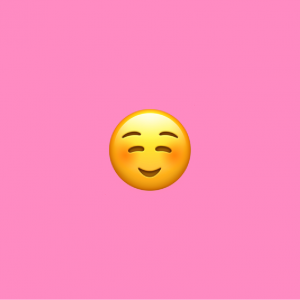 The smiling face emoji is an old-timer, at least as far as the internet is concerned.

It originated in Unicode 1.1 in 1993 as ☺, called the white smiling face not because of skin tone but because of its white background, in contrast to ☻, or black smiling face. Internet users sometimes still use ☺ to be retro and older platforms may automatically generate ☺ if you type the smiley emoticon, :).

my cats are now in competition over my lap....bless winter ☺

In texts and social media, the white smiling face emoji gets used to show a wide range of feelings of happiness, enjoyment, pleasure, and contentment.

Because of those cheeks, the emoji can also be used when something makes you blush.

That outfit and those nylons! I think I have a new girl crush☺☺ https://t.co/E7V23ZSElK

Excitement and feeling blessed are also on the emotional palette of white smiling face emoji.

Just received my acceptance letter from the university of Windsor!!! ☺☺

So is cuteness. Just look at this widdle pupper!

White smiling face also has its sweet side, wishing love and peace.