What does Marianne Williamson mean?

Marianne Williamson is an author, activist, and progressive Democratic candidate for the 2020 presidential election. Her New Age beliefs and personality were notably parodied online after the June 2019 Democratic debates.

Medicare for All, The American Dream, soyboy, political spectrum

Where does Marianne Williamson come from? 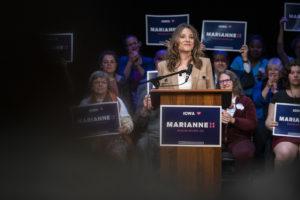 Marianne Williamson (born in Houston, Texas in 1952) is the author of 13 books, including her 1992 bestseller A Return to Love. Her writing focuses on New Age spirituality, self-help, the power of love, and healing. Williamson is also activist, including founding or participating in efforts in the areas of HIV/AIDs, women’s rights, peace, and poverty.

After losing a bid for California’s statehouse in 2014, Williamson announced a run for the White House as a Democrat in January 2019. Her platform includes tackling climate change, student loan debt, and income inequality.

She has gained a lot of attention, though not necessarily supporters, after the June 26, 2019 Democratic debate—especially in the form of memes and other jokes on social media dismissing her, say, as a woo-woo spiritual guru obsessed with healing crystals and who will “harness love” to defeat Donald Trump. According to Google Trends, Marianne Williamson was the most searched for candidate after the debate.

Okay; I'm reading Marianne Williamson's weight loss book for my sins.
@nberlat, July 2019
Amid all this God-talk, only one candidate talks about the spiritual world for a living: Marianne Williamson.
Jack Jenkins, Religion News Service, April 2019
It’s tempting to dismiss Marianne Williamson, who arrived on the Democratic debate stage in late June to declare, “I’m going to harness love for political purposes.” But many people are completely serious about her.
Emily Stewart, Vox, July 2019
SEE MORE EXAMPLES

When your bro brings the new girlfriend to poker night and she starts talking about healing crystals pic.twitter.com/aopr9nlPXJ 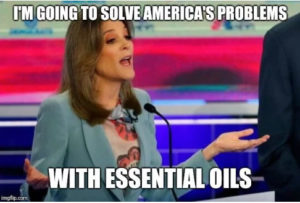 The most important things in life are not visible to the physical eye. It’s only when we soul-explode beyond the confines of the mortal self, expanding the boundaries of what we think is real, that we begin to glimpse the truth of who we are and why we’re here.

There are entire accounts on Twitter and Facebook dedicated to Marianne Williamson memes. Some of them are very obscure and absurd, i.e., dank memes. Apparently due to her associations with crystals, her supporters are ironically called #OrbGang, sometimes tagged with the crystal ball emoji, 🔮.

Marianne Williamson and her team appear to have a sense of humor about the joking attention she gets, sharing her own quirky memes. After Vogue ran a July 2019 story on the female Democratic candidates but left her out, for instance, her social media posted edited her into a picture of the women. 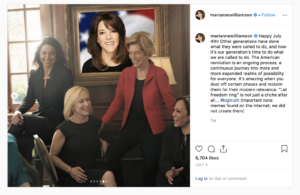 Marianne Williamson is discussed in the context of politics and culture in such popular publications as Vox and HuffPost. A lot of coverage, though, is less interested in Williamson as a serious contender for the presidency (she seldom gets over 1% in polls) and more so on who she is and why people are making jokes about her.