What does frohawk mean?

A frohawk is a type of mohawk hairstyle with Afro-textured hair.

Where does frohawk come from? 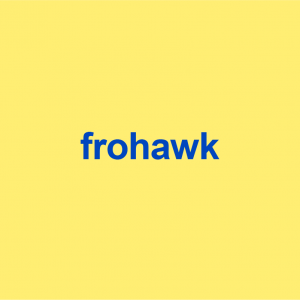 The term frohawk is a blend of the words mohawk and fro, used to describe a mohawk hairstyle worn by people with Afro-textured (fro) hair.

Though the contemporary frohawk takes part of its name from the Native American Mohawk tribe, the actual frohawk hairstyle has a long history in Africa, worn by tribes such as the Mandinka. It was these Mandinka roots that inspired actor Mr. T to don a frohawk in the 1980s, which popularized the hairstyle when he became a star on the TV series The A-Team. While Mr. T made it more popular for people to wear this Mandinka-inspired look, the exact origins of the term frohawk are unclear. Urban Dictionary entered frohawk in 2003 and the term appears on an internet message-group in 2004. Frohawk first appeared on Twitter toward the latter half of 2007.

Regardless of origin, the frohawk hairstyle underwent a revival in the 2010s, when it was worn by Usher on the cover of his 2012 album Looking 4 Myself. Following this, the term frohawk gained popularity, with Google Trends showing that searches for frohawk spiked throughout the 2010s. The term may have been additionally popularized in the 2000s by visual artist Umar Rashid, who goes by the name Frohawk Two-Feathers, though Rashid does not wear a frohawk hairstyle.

The popularity of frohawks—particularly when worn by women—may be further due to the increasing acceptance of natural black hair, previously deterred by the societal pressure for black women to adopt whiter, straighter, more European hairstyles.

That time I tried to give esaias a lil frohawk
@kyaxcheeks, March, 2018
Myeshia Carter rocks her frohawk in New Orleans, LA.
Deena Campbell, Essence, November, 2015
Soooo I did a FroHawk and a "bang" with my natural hair and I lowkey really really like it. Imma rock it for a few days
@jdjones589, December, 2017
SEE MORE EXAMPLES

Frohawk is used by hairstylists and fashion writers, as well as in colloquial speech and writing, for various forms of the frohawk. The hairstyle is most popular among black men and women in the US and Europe.

The hairstyle is not be confused with the unrelated surname, Frohawk.

This is not meant to be a formal definition of frohawk like most terms we define on Dictionary.com, but is rather an informal word summary that hopefully touches upon the key aspects of the meaning and usage of frohawk that will help our users expand their word mastery.