What does microblading mean?

Microblading is a technique that creates semipermanent eyebrow tattoos. It uses a pen-like tool with tiny needles that add pigment to someone’s eyebrows. Microbladed eyebrows usually last about just over one year.

Where does microblading come from? 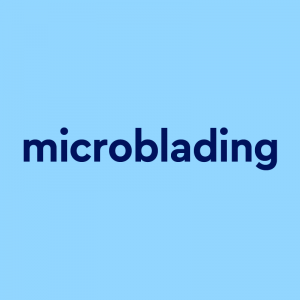 Microblading is done with a pen-like instrument that adds semipermanent pigment with a bundle of about a dozen or so tiny (micro) needs (blades), hence the name. These “micro blades” allow the artist to replicate the fine hairs that make up our eyebrows.

This microblading is not to be confused with another type of microblade, another term for a bladelet, a type of small, stone blade used in the Stone Age. (We don’t think you want to apply that to your brow.)

Also popularly known as eyebrow embroidery, among other names, the technique of microblading is thought to originate in Asian cosmetology in the past several decades. Microblading began spreading among beauty experts in Europe and North America in the early 2010s, breaking into the mainstream in 2020 and with notable media coverage in the likes of Cosmopolitan, Elle, Allure, and more.

As for the process itself, microblading is like a shallower tattoo, only inserting pigment to the outer layer of the skin. This makes microbladed eyebrows last for about 12–18 months, and heavy sweating can shorten their lifespan.

Microblading generally takes about an hour and can cause mild pain and discomfort. According tohttps://www.dictionary.com/browse/shallow Cosmopolitan, it costs from $500–$2000. Microblading is generally considered a form of cosmetic tattooing, which is regulated by state laws. A microblading technician can be referred to as a microblader, and some tattoo artists may also be trained in microblading.

So obsessed with my eyebrows after my microblading touch up I could just stare at myself for hours
@saraita514, September 6, 2020
Microblading—the process of applying tiny, semipermanent tattoos to the brow area to mimic the look of hairs—has become so popular that finding a skilled, certified professional to perform the treatment in any given location isn’t very difficult.
Olivia Muenter, Allure, August 25, 2020

Microblading has become an increasingly popular service, providing customers fuller, shapelier, or more colorful eyebrows if they so need or desire them. Microblading is an alternative to permanent eyebrow tattoos but also can be more convenient than hand-penciling in one’s brows every day. People with medical or other conditions affecting their eyebrows may also seek out microblading.

Before and after brow selfie! So pleased with them!…. Its the little things in life 😊 #selfcare #microblading pic.twitter.com/vxkGyQYr9r

I think I should treat myself to some eyebrows 😅 who does microblading out here??

microblading update: I’m half way through the healing process and so far so freakin’ good!!! 2 more weeks to go ✨ pic.twitter.com/ycfqR43E1l

This is not meant to be a formal definition of microblading like most terms we define on Dictionary.com, but is rather an informal word summary that hopefully touches upon the key aspects of the meaning and usage of microblading that will help our users expand their word mastery.