What does red bottoms mean?

🎶 These expensive, these is red bottoms 🎶, a slang term for the red-soled shoes from French fashion designer Christian Louboutin. Red bottoms are a popular sign of luxury and class in women’s high-end fashion.

Where does red bottoms come from? 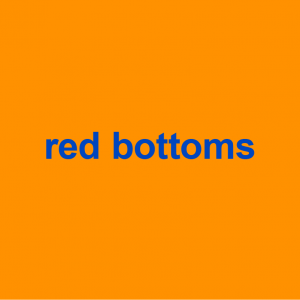 Though Christian Louboutin had been designing shoes since the early 1980s, it was in 1993 when he had the inspiration for what became his signature red bottoms.

Legend has it that one of his assistants was painting her nails red, which inspired Louboutin to bring the sole of his stiletto to life with a daring pop of red lacquer. And so, red soles were born as a synonym for Louboutins—and an icon of haute couture, luxury, and wealth more generally.

Since at least the early 2000s, hip-hop artists dubbed these red bottoms, a term which has since spread into popular culture. In hip-hop culture, red bottoms often figure as a way to tout one’s wealth, as a par of Loubs cost hundreds of dollars on the low end.

In 2008, Christian Louboutin registered the red soles as a patent, and in early 2011, he took Yves St. Laurent to court for designing an all-red shoe—all red meaning, of course, that the soles were red, too.

Google searches for red bottoms spiked at the height of this legal battle, when Louboutin appealed a lower court decision to allow YSL to continue producing the red shoes. It would be late 2012 before the case was settled, with the court deciding that shoes with red soles, when the rest of the shoe is any other color, are protected by Louboutin’s trademark. The trademark, though, is still in court from a 2012 dispute with Dutch brand Van Haren. These bloody shoes can’t catch a break, it seems.

Usage of the specific phrase red bottoms peaked in September, 2017 when American rapper Cardi B’s single “Bodak Yellow” was taking over the Billboard charts. For 3 weeks at #1 and 35 weeks total on the charts, people could turn on the radio and hear Cardi B rap: “These expensive, these is red bottoms / These is bloody shoes / Hit the store, I can get ’em both / I don’t wanna choose.”

Because she knows she gone be wearing red bottoms when she grown !!! https://t.co/C17zrjJsjM

Though many other artists have referenced red bottoms through the years, Cardi B’s hit brought the term back into the spotlight. The song also inspired a meme where people riffed on her red bottoms lyrics with other footwear.

these expensive these is bread bottoms pic.twitter.com/zK4w8kBVnD

Louboutin, seemingly unaware of who Cardi B is, has not pursued any litigation for the reference.

idc how good life gets, i’m never posting a pic w/ my foot up to show the red bottoms
@laiahnna, May, 2018
❤❤Sexy red bottoms❤❤ #sexy #redbottoms #allclass #dontmesswithmem8 #kickarseshoes #confidence+
@owl.empoir, Instagram, May, 2018
Dressed in a sparkling Chanel mini, KStew went barefoot on the red carpet with zero shame. Now, that’s our kind of red carpet entrance! And, hey, if we had red bottoms on our feet, we wouldn’t mind holding them for the camera to see, either.
Jenna Lemoncelli, Hollywood Life, May, 2018
SEE MORE EXAMPLES

Louboutins have been synonymous with luxury and fashion since their inception. In fact, the term red bottoms has even come to serve as a direct synonym for Louboutin shoes of any heel height.

The term red bottoms has really taken off in the 21st century with cultural references in hip-hop, rap, and pop song lyrics. In these songs, any rapper or singer dropping lines about red bottoms is bragging about fancy shoes, yes, but also about the luxurious lifestyle they or someone else leads.

Most iconically, Cardi B has inspired social-media users (mostly women) to post pictures of themselves wearing red bottoms along with other references to the lyrics of “Bodak Yellow.” These posts carry a tone of flirtatiousness, confidence, and sexiness.

It wouldn’t be classic a reference to red bottoms, though, without a nod to the price of the shoes and the hustle (or lack thereof) required to earn enough money to pay for them.

I’m just ready to wake up in my mansion, hop in my Tesla and head to my 200k job in my red bottoms in 5 Years 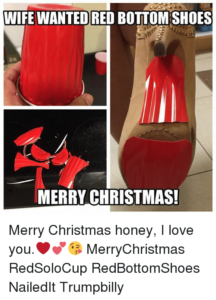 Red bottoms and the associated hustle aren’t without their critics, though. Louboutins are seen by some as an extravagant expense that gets shown off a little too obviously.

We get it nigga. You’re wearing red bottoms at prom. Put your foot down.

This is not meant to be a formal definition of red bottoms like most terms we define on Dictionary.com, but is rather an informal word summary that hopefully touches upon the key aspects of the meaning and usage of red bottoms that will help our users expand their word mastery.