What does soul patch mean?

A soul patch is small, carefully shaped bit of facial hair just below the lip, usually with the rest of the chin or face shaven.

Where does soul patch come from? 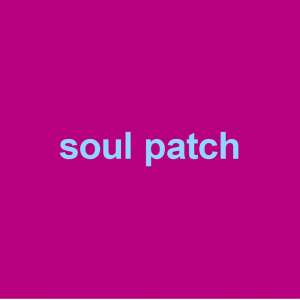 Also known as a mouche, jazz dab, or jazz dot, the soul patch is a tiny strip of hair placed just below the lower lip on a face that is otherwise clean shaven. The soul patch should not be confused with the goatee, which features the hair of a soul patch in addition hair on the chin and a mustache. Though soul patches can be combined with other facial styles, such as the distinctive mustache/beard combo of musician Frank Zappa, some say the rest of the face must be free of facial hair to achieve a “true” soul patch, according to some beard enthusiasts.

The soul patch was originally associated with jazz culture. It became famous when it was donned by jazz trumpeter and Beat Generation hero John “Dizzy” Gillespie, though at the time it was called the jazz dab, jazz dot, or even the “Dizzy Gillespie beard,” especially as it came to be adopted by beatnik culture in the 1950s and 60s. Interesting enough, some brass musicians say the facial hair makes it easier for them to play their instruments.

Though these “Dizzy” beards continued to be worn after that, usually associated with jazz, it wasn’t until the 1970s that the name soul patch came to be associated with them. In print, one of the first appearances of the term was in a 1979 issue of Rolling Stone, where it was used to describe a soul patch worn by one of the Blues Brothers. Soul patch was later used in a 1987 issue of National Lampoon.

By the 1990s, the soul patch had shed its jazz roots. It was donned by Luke Perry in the 1992 film Buffy the Vampire Slayer, and began becoming a popular facial hair style with Pacific Northwesterners, the grunge scene, Boston hipsters, and celebrities. Since then, the soul patch has become deeply intertwined with 90s culture, and soul patches worn today are usually seen as a throwback. Since then, it has faded in popularity.

“Someone with a soul patch is gonna try to teach me something I know already, or have actively avoided learning thus far”
Casey Worthington @IrvingWorthing Twitter (April 6, 2017)
“every guy with earrings and a soul patch has an acoustic guitar in his apartment that's tuned to drop D”
@rad_milk Twitter (April 12, 2017)
“This choice of facial hair gives you a touch of rebellion and delusion. If you add a turtleneck and some tinted shades, you are on your way to elitism. Don’t look into the eyes of someone with a soul patch; your soul will be taken.”
Elena Herrera, “Your facial hair says something about you; A Soul Patch bares your soul,” Pipe Dream (April 23, 2010)
SEE MORE EXAMPLES

While a subtle fashion of facial hair, the soul patch has been connected to a number of countercultural movements through the 20th century. In the 1950s, it was the beatniks. Some hippies wore them in the 1960s, though they more often wore full beards. In recent decades, soul patches are often connected to the 1990s, where popular musicians and celebrities wore them (and other facial hair styles) as a response to the corporate conservatism of the 1980s.

Some jokingly refer to the soul patch as the flavor saver, given the way food can get caught in the facial hair. While this style of facial hair is widely referred to as a soul patch, the term is often used to ridicule people who wear them.

This is not meant to be a formal definition of soul patch like most terms we define on Dictionary.com, but is rather an informal word summary that hopefully touches upon the key aspects of the meaning and usage of soul patch that will help our users expand their word mastery.