Who is Freddy Krueger?

Here’s the insomnia you ordered. Freddy Krueger, sometimes referred to simply as Freddy by horror fans, is the villain of the Nightmare on Elm Street movie series. The spirit of a dead child-killer, Freddy is best known for being able to terrorize kids in their dreams based on their fears, and kill them.

He has a set of visual trademarks including a burn-scarred face, a fedora-like wide-brim hat, a knife-fingered glove, and a red and green striped sweater.

Where does Freddy Krueger come from? 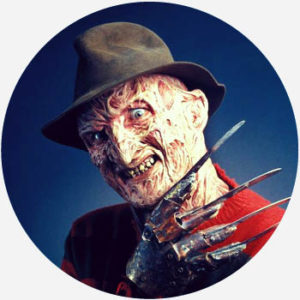 Freddy Krueger first appeared in the 1984 horror movie A Nightmare on Elm Street, directed by Wes Craven. Robert Englund played Krueger in Nightmare and its sequels.

Craven based the idea of a killer who could kill even in dreams on an LA Times article about a child who died in his sleep while apparently having nightmares. 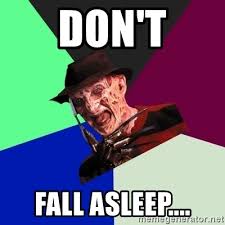 Nightmare on Elm Street ended up grossing over $25 million at the box office. Since the first movie, seven sequels (all with Englund playing Freddy), and one remake (without Englund) have been produced. The film magazine Empire named Freddy Krueger the second best horror movie character, after Ash from Evil Dead.

first time make up test for Freddy Krueger in a A Nightmare on Elm Street
1984#horror #slasher pic.twitter.com/BBdIE9oTaV 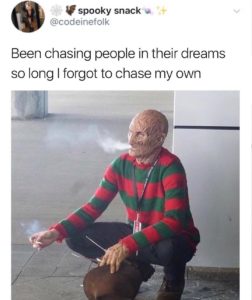 Know Your Meme
He comes to me at night after I crawl into bed / He's burnt up like a weenie and his name is Fred!
Will Smith, “Nightmare on My Street,” He’s the DJ, I’m the Rapper, August 1988
SEE MORE EXAMPLES

Freddy Krueger’s imprint on pop culture is vast. He’s been referenced in other movies, in TV shows like South Park and The Simpsons, and in songs by Will Smith and Nicki Minaj.

Freddie Krueger In terms of the killer’s appearance, Craven wanted his villain to stand out from those in other horror movies. He noted “I wanted my villain to have a ‘mask,’ but be able to talk and taunt and threaten. So I thought of him being burned and scarred.” Craven also wanted to outdo other slasher villains in the weaponry department, saying “A lot of horror villains used knives as weapons, and I didn’t want to duplicate that. So I thought, How about a glove with steak knives?”

If Freddy Krueger was going to give you a nightmare based on your fears, what would your nightmare be about?#horror
(Political answers will be blocked. Entertainment only) pic.twitter.com/uvmCbyzguT

Even Freddy’s sweater was designed to be “subliminally unsettling.” Craven read in Scientific American about a particular pair of red and green shades that the human eye has difficulty distinguishing from one another.

Check out this premium design, available on a range of custom products, colors & sizes!

Day fifteen of our twenty days of Funko is this Freddy Krueger Pop!

Just follow @sttepodcast and RT this tweet to be in with a chance of winning these @OriginalFunko goodies#Competition #Win #Funko #Prize #20DaysOfFunko #Horror pic.twitter.com/fojtDMCCB1

This is not meant to be a formal definition of Freddy Krueger like most terms we define on Dictionary.com, but is rather an informal word summary that hopefully touches upon the key aspects of the meaning and usage of Freddy Krueger that will help our users expand their word mastery.