Who is Iron Fist?

Iron Fist is a Marvel Comics superhero who practices martial arts. His name, in part, alludes to the expression iron fist, a metaphor for ruthless authority.

Where does Iron Fist come from? 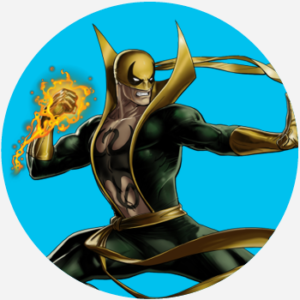 The original Iron Fist comics were published by Marvel in 1974, a time when martial-arts movies and heroes were very popular in the United States.

Written by Roy Thomas and Gil Kane, Iron Fist tells the story of Danny Rand, a white man who discovered an interest in martial arts and trained to become a master. After Rand defeats the dragon Shou Lao, he acquires the dragon’s mystical power and is able to channel it into his fist, giving him great strength—and an iron fist.

Iron Fist starred in his own comic, partnered with another Marvel hero, Luke Cage, and enjoyed a romance with police officer Misty Knight, making him one of the first and few superheroes to engage in interracial romance and fighting partnerships. He was first killed off in 1986, though subsequently rebooted.

In 2017, Marvel and Netflix co-produced a TV series, Iron Fist, that aimed to introduce the character to the expanding Marvel cinematic Universe. The show was quickly criticized for not casting an Asian actor in the role of Danny Rand and for engaging in various racial stereotypes. It was met with poor reviews. 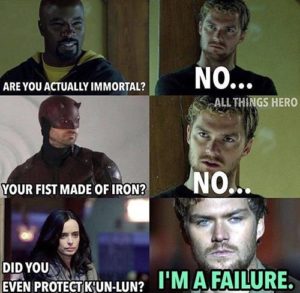 Outside the character, the idiom iron fist (since the 1600s), especially appearing in the expression to rule with an iron fist, describes very firm and resolute behavior, often characterizing the oppressive exercise of power.

girl: wanna com over n watch natflex😘😘😘👅👅👅 me, Big oblivious: bet i aint watch defenders yet n i dont wanna watch iron fist bc i heard its trash also im so excited for infinity war moe...
@meedbon, April, 2018
Just down the road from the nation's political power base at Parliament House, the GWS Giants have continued to rule with an iron fist at Manuka Oval.
Caden Helmers, The Age, April, 2018
Hopefully this is not the end of the conversation, because the conversation itself has exposed an uncomfortable truth; Iron Fist is a troubling concept to sell with a white guy in the lead. Comics fans have debated the pros and cons of turning a white martial artist into an Asian hero, but the debate has largely ignored the reality that Iron Fist's whole origin and conception belong to the past --- if he's a white guy.
Andrew Wheeler, Comics Alliance, January, 2015
SEE MORE EXAMPLES

Iron Fist is mostly used among fans of Marvel media, though the character, as noted, has come under more public scrutiny for the 2017 show’s whitewashing of Asian actors and appropriation of Asian culture.

While iron fist sees formal and informal use in a range of contexts, the expression is particular prevalent in political discussions, denoting leaders who control or govern as or like autocrats. 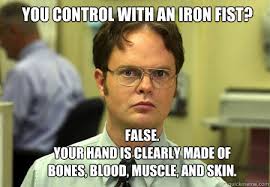 This is not meant to be a formal definition of Iron Fist like most terms we define on Dictionary.com, but is rather an informal word summary that hopefully touches upon the key aspects of the meaning and usage of Iron Fist that will help our users expand their word mastery.