Who is Salad Fingers?

Salad Fingers is the main character featured in the animated web series of the same name. The series is infamous for its creepy and disturbing content.

Where does Salad Fingers come from? 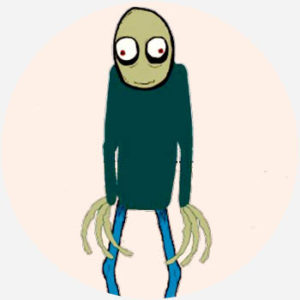 Salad Fingers was first uploaded to the social-media website Newgrounds on July 1, 2004. The short animated clip—created in Adobe Flash by British animator David Firth, who posted his video under the username Doki—gained notoriety for its eerie qualities and unsettling content.

The character Salad Fingers is a bizarre, humanoid creature with green skin. It has three, tendril-like fingers on each hand, yellowing teeth, and creepy eyes. The character speaks in haunting tones about his love for rusty spoons and particularly enjoys how they feel against his salad fingers.

According to one interview Firth gave in 2005, the name Salad Fingers was inspired by a friend’s instant-messaging username: “Salad Fingré.” Also in 2005, the series was acclaimed as the “best flash animation online” by the San Francisco Chronicle’s year in review.

Hello, I like rusty spoons. And I like to touch them. The feeling of rust against my salad fingers is almost orgasmic.
Salad Fingers (character) by David Firth, Salad Fingers 1: Spoons, July, 2004
Humans are going to evolve to have really long thumbs just so they can reach the top corner of their phone. It’ll be a whole race looking like salad fingers...#showerthoughts
@Thoughts4Shower, February, 2018
Have your nightmares dissipated in the four-plus years since the last episode of the online horror cartoon Salad Fingers aired? Well, you might not want to sleep alone tonight, because the little green Brit is back.
Brenna Ehrlich, Mashable, May, 2011
SEE MORE EXAMPLES

Salad Fingers can refer to both the character and Firth’s series, produced between 2004–13. Salad Fingers is sometimes revered as a storied part of the dark strangeness of early-internet creativity and culture. It’s often referenced as a touchstone of adult-themed flash animation, a format that thrived on websites like Newgrounds, in the early 2000s.

Fans will dress up as Salad Fingers for Halloween or other dress-up occasions. Quotes and other scenes from the series are used as GIFs and memes. The character’s signature fingers are sometimes referenced when people are talking about long, gross-longing appendages, and the character’s pleasure in scraping rusty spoons is often used to reference euphoric experiences.

This is not meant to be a formal definition of Salad Fingers like most terms we define on Dictionary.com, but is rather an informal word summary that hopefully touches upon the key aspects of the meaning and usage of Salad Fingers that will help our users expand their word mastery.