Shanaynay, among other spellings, is an invented name for a stereotypical “ghetto” Black woman; use of this name as such is extremely offensive except among some contexts among Black people.

Comedian Martin Lawrence famously created and performed such a character, named Sheneheh Jenkins, on his 1990s sitcom, Martin. YouTuber Shane Dawson, who is white, created another such character in the 2000s, named Shanaynay, which has been criticized as racist.

Where does Shanaynay come from? 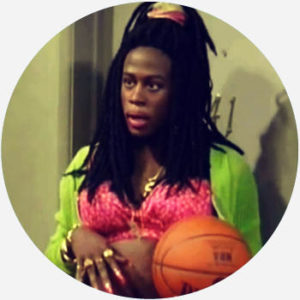 On his TV show Martin, comedian Martin Lawrence played several different characters in makeup and prosthetics, one of whom was Sheneneh Jenkins. Appearing on the full run of the show from 1992–97, Sheneneh Jenkins was played as a “ghetto girl” with lots of gold jewelry, a large butt, elaborate hair, a loud voice, and a sassy attitude that makes her prone to picking fights. The name Shenehneh is, apparently, meant to poke fun of Black-sounding names. She ran a salon called Sheneneh‘s Sho’ Nuff Hair Salon. Sheneneh became one of Lawrence’s most recognizable and popular characters. 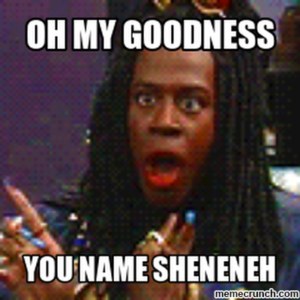 Her catchphrases include “Oh my goodness!” and “I’m a laaaady.” She had a signature dance on the show, which, thanks to the hip-hop group We Are Toonz, inspired the viral Nae Nae dance craze in 2015 named for her.

Shanaynay is also a character performed by YouTube star Shane Dawson in several of his videos. First appearing in 2008 and sporadically appearing since, Dawson portrays Shanaynay as a white “ghetto girl” who unabashedly adopts Black culture and speech. Dawson’s Shanaynay is known for her ridiculous exploits, some of which are illegal. The similarity between her name and persona to the Martin character has led to criticism of Shanaynay as a ripoff. Dawson has also been widely called out for racism in his portrayal of Shanaynay and in other comedy sketches. 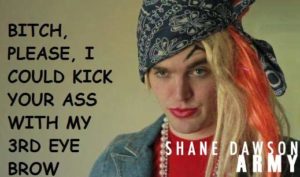 I'm trying to crack that elusive market of fans who love B level alien superheros and also Sheneneh Jenkins. I'll let you know how it goes.
@whoisrico, March, 2018
The idea and exact tone [of Dawn's video] is a direct lift from Willam’s Beatdown, while the “Shanaynay” character is just ripping off Martin Lawrence, for God’s sake. And it’s awful!
Richard Lawson, Vanity Fair, January, 2015
so y'all all had a problem with Shenehneh n Laquanda, but we're just gonna let Stormi and True slide without pause? I'm sick of rich ppl n their freedom to give their children dumbass names cuz they won't get bullied. Y'all changing the game n it's not fair.
@blys56, April, 2018
SEE MORE EXAMPLES

Beloved to fans of Martin, Sheneneh Jenkins is a recognizable character in comedy and black entertainment, and appears in popular memes, GIFs, and references in contemporary internet culture.

For a non-Black person to call a black woman a Sheneneh is considered very offensive.

While Dawson’s many fans like his Shanaynay, which he says is meant as a parody of white women trying to act black, many criticize the character for its racial, if not racist, stereotypes.

This is not meant to be a formal definition of Shanaynay like most terms we define on Dictionary.com, but is rather an informal word summary that hopefully touches upon the key aspects of the meaning and usage of Shanaynay that will help our users expand their word mastery.