Who is Sideshow Bob?

Sideshow Bob is a fictional clown, criminal, and nemesis of Bart Simpson on the animated TV show The Simpsons. A secondary attraction at a circus, carnival, or other event is typically known as a sideshow.

Where does Sideshow Bob come from? 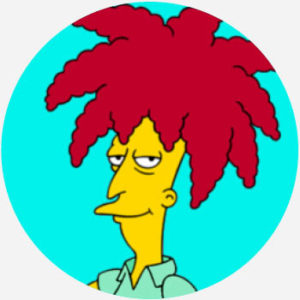 Sideshow Bob first appeared in an episode of the first season of The Simpsons in 1990. Sideshow Bob serves as the sidekick to Krusty the Clown. Actor Kelsey Grammer, who voices Sideshow Bob, has referred to the character as “Krusty the Clown’s sideshow.” The character, who has appeared in over a dozen The Simpsons episodes, is known for his large spiky hairdo, his erudition, and his murderous quest for vengeance against Bart Simpson and Krusty. A person with voluminous hair may be compared to Sideshow Bob.

A 1993 episode featured a gag in which Sideshow Bob repeatedly steps onto a number of garden rakes, which then rise to hit him in the face. This scene is sometimes referenced to describe comical ineptitude or repeated misfortune.

Virginia State Delegate Robert G. Marshall has been referred to as Sideshow Bob by Democrats and Republicans alike, according to The Washington Post. But, distraction and drama in politics have been described as a political sideshow since at least the 1920s.

It’s real hard-core—as long lasting as the battle between North Korea and South Korea, Bart Simpson and Sideshow Bob, Marvel and DC.
Sam Greenspan, 11 Points Guide to Hooking Up, 2011
it's good that Lena Dunahm's life is a long format version of the scene in The Simpsons where sideshow bob steps on about 50 rakes in a row
@nopoweradeinusa, January 2018
I can tell you that there’s a teenager named Coogie (Jahking Guillory), who has huge, frizzy, borderline Sideshow Bob hair and rides his bike all over the neighborhood…
Matt Zoller Seitz, Vulture, January 2018
SEE MORE EXAMPLES

People are often referencing the character, Sideshow Bob, when using the term. Sideshow Bob can also be used as an adjective, to describe someone’s hair or clumsiness. Comparing a person’s appearance to Sideshow Bob may be humorous, but it can also contain an element of mockery. Because these comments are often directed at black people, particularly their hair, calling someone Sideshow Bob may be construed as racist.

Sideshow Bob’s rake gag has permeated pop culture to the point that references have appeared in The Telegraph and The Evening Standard.

This is not meant to be a formal definition of Sideshow Bob like most terms we define on Dictionary.com, but is rather an informal word summary that hopefully touches upon the key aspects of the meaning and usage of Sideshow Bob that will help our users expand their word mastery.