Who is Turd Ferguson?

Where does Turd Ferguson come from? 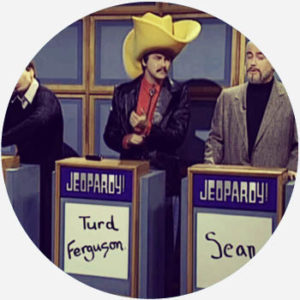 Turd Ferguson is a flippant name that joins the word turd, slang for fecal matter, and Ferguson, an ordinary surname.

The name originates from a Saturday Night Live recurring sketch called “Celebrity Jeopardy!” a parody of the TV show Jeopardy! hosted by Alex Trebek. The first skit aired in 1996. In “Celebrity Jeopardy!” comedian Will Ferrell plays a spoof version of Alex Trebek trying to manage an erratic and ridiculous cast of comedians imitating real-life celebrities, notably including Darrell Hammond as Sean Connery. The sketch was created by comic Norm Macdonald, inspired by a skit called “Half-Wits” from the Canadian sketch comedy show, SCTV. Macdonald says he concocted the skit just so he could play a 1970s-era Burt Reynolds.

On Jeopardy!, contestants write their own names, which are then displayed on a blue screen on the podium. Alluding to this, Norm Macdonald’s Burt Reynolds rewrites his name as “Turd Ferguson” in a 1999 “Celebrity Jeopardy!” When Ferrell-as-Trebek comments on this change, Macdonald’s Reynolds smiles, casually replying, “Yeah, that’s right. Turd Ferguson. It’s a funny name.” As the skit continues, Reynolds uses the name to push Trebek’s buttons. At one point, when Trebek calls out his name “Burt Reynolds,” Reynolds compels Trebek to say “Turd Ferguson” instead.

The name Turd Ferguson proved a memorable one, earning traction on the internet as a funny name after the skit. Many fans of the skit urged SNL to reprise the Turd Ferguson bit.

In 2015, the Turd Ferguson joke made it to real-life Jeopardy! When contestant Talia Lavin, a fact-checker at The New Yorker, was given the “Final Jeopardy” clue: “This song from a 1999 animated film about censorship had a word censored from its Oscar performance.” Unable to figure out the answer, Lavin instead joked: “What is the Love Ballad of Turd Ferguson?” This forced Alex Trebek to say “Turd Ferguson” on air, fulfilling the hopes and dreams of many SNL fans, as well as creating a splash across the internet.

Lavin said that behind the scenes, Trebek asked what Turd Ferguson meant after reading it. According to Lavin, Trebek admitted to not getting the joke, but was genial about about it. Since the incident, Trebek is now clued in on the joke.

“@teampreston Just be prepared: He'll just tell you he used Turd Ferguson in a book he wrote 10-15 years ago.”
David Hill @machineiv Twitter (December 11, 2009)
“:D :D She doesn't cover her poo like a regular cat and stinks up the whole house, so that's when I call her Turd Ferguson LOL”
@hiryuu_asami Twitter (December 9, 2015)
“In addition, to honor the brave men and women who serve our country after this Memorial day weekend, we have decided to sit down for a special edition of 'Talk-It-Up Tuesday' with our good friend, R/C hero, and airman...the one and only Turd Ferguson!”
Mike Garrison, “Talk-It-Up Tuesday with "Turd Ferguson",” LiveRC.com (May 28, 2013)
SEE MORE EXAMPLES

Turd Ferguson is sometimes adopted as a username on social networks or message boards as a cheeky pen name. It’s used as an irreverent screen name for someone leaving a negative product review.

Turd Ferguson is also used as a term of disparagement for someone who is obnoxious, particularly an internet troll that annoys others just for the sake it. Coupled with the fact that turd itself is an insult for a “contemptible person,” this usage also alludes to how Turd Ferguson pesters Alex Trebec in the “Celebrity Jeopardy!” skit.

This is not meant to be a formal definition of Turd Ferguson like most terms we define on Dictionary.com, but is rather an informal word summary that hopefully touches upon the key aspects of the meaning and usage of Turd Ferguson that will help our users expand their word mastery.