What does Weeping Angels mean?

Weeping Angel refers to a type of monster with the capability of sending others back in time by touching them. They are unable to move while being watched by any living creature, including their own kind, and are turned into stone while an observer’s eye is on them.

Where does Weeping Angels come from? 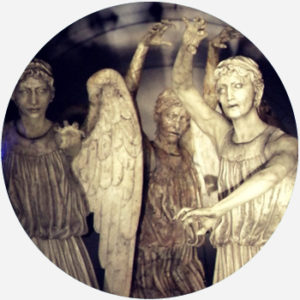 Weeping Angels first appeared in the 2007 Doctor Who episode “Blink.” The episode’s title comes from the advice the Doctor gives: “Don’t blink. Blink and you’re dead. They are fast. Faster than you can believe. Don’t turn your back. Don’t look away. And don’t blink. Good Luck.”

In the episode, and subsequent ones featuring Weeping Angels, the creatures turn to stone whenever they’re observed. However, when no one is watching them, these nefarious beings can move with extreme speed. As soon as they touch their victims, they transport them back in time and absorb the resulting energy.

When the creatures are stone, they look like statues of angels. They often cover their faces to avoid freezing each other by looking into another Weeping Angel’s eyes. This causes them to look like they’re weeping, giving them their name. The Weeping Angels often look like beautiful statues, however, if you happen to catch them right before an attack, they appear monstrous, with bared fangs and horrifying claws.

The creatures are also known as Lonely Assassins, but this name isn’t used as much in the episode or the fandom.

“The Weeping Angels from Doctor Who are 100% the most terrifying creatures ever”
Alex Hickson @ashickson Twitter (March 19, 2017)
“I might not be an expert on aliens but I’m very sure it’s a terrible idea to play peek-a-boo with a Weeping Angel”
awinchesterwithabox Tumblr (January 14, 2017)
“Weeping Angels were introduced in the 2007 episode Blink and are the villain that left fans too terrified to hide behind the sofa, for fear of being sent back in time for not keeping their eyes open.”
Tony Diver, “Steven Moffat reveals how he came up with the weeping angels,” Radio Times (November 23, 2016)
SEE MORE EXAMPLES

The Weeping Angels are an incredibly popular Doctor Who monster. There’s a song about them by Trock (Timelord rock) band Chameleon Circuit, and merchandise such as figurines and tree toppers are available. It’s not uncommon for Whovians to caption photos of ordinary, non-life energy sucking angel statues with references to the episode.

Allegedly, the CIA, together with MI5, developed a hacking tool to control smart TVs. It includes a fake off-mode that would make the TV look like it was off, yet continue to record conversation and other sound. This tool was named Weeping Angel. Whether the tool was ever completed or used is a matter of debate, but it seems that this piece of Doctor Who terminology has moved beyond the fandom, and found its way into the language of intelligence-gathering professionals.

This is not meant to be a formal definition of Weeping Angels like most terms we define on Dictionary.com, but is rather an informal word summary that hopefully touches upon the key aspects of the meaning and usage of Weeping Angels that will help our users expand their word mastery.