Who is Wednesday Addams?

Wednesday Addams is a fictional character from The Addams Family dark comedy franchise. Like other characters in her family, she’s known for her spooky personality and Gothic appearance.

Where does Wednesday Addams come from? 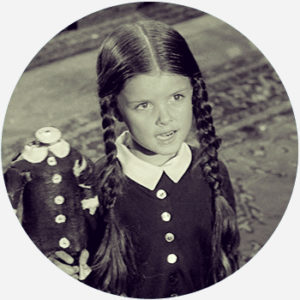 Wednesday Addams originates in comics that first appeared in 1938 by New Yorker cartoonist Charles Addams. Although the characters in the comic didn’t have distinct names or fixed designs at first, Addams decided on names, personalities, and looks for each character when adapting his comic in 1964 for TV as The Addams Family.

Wednesday Addams, the daughter of the family, was likely named after a nursery rhyme containing the line “Wednesday’s child is full of woe.” The poem, which assigns personalities to children based on the day they were born, dates back to at least 1838. The television character was, like the rest of her family, unconventionally morbid and cold, with a penchant for chopping off dolls’ heads.

In 1991, an Addams Family movie was released, which further developed Wednesday Addams’s character. The long braids and collared dresses that the character wore in the television series were resurrected, with a yet more severe, Gothic twist.

Wednesday Addams can refer not just to the character but also to things that call to mind her appearance and demeanor. For instance, a Wednesday Addams dress is dark-colored with a white collar. A Wednesday Addams look can feature long, dark braids and black-and-white clothing.

Highlighting the popularity of the character and the distinctiveness of her personality, a webseries called Adult Wednesday Addams was created in 2013, which followed the character’s adventures as a grown-up. Although it was flagged for copyright violation in 2015, it earned 12 million views before taken down.

This is not meant to be a formal definition of Wednesday Addams like most terms we define on Dictionary.com, but is rather an informal word summary that hopefully touches upon the key aspects of the meaning and usage of Wednesday Addams that will help our users expand their word mastery.