What does nonbinary gender mean?

Where does nonbinary gender come from? 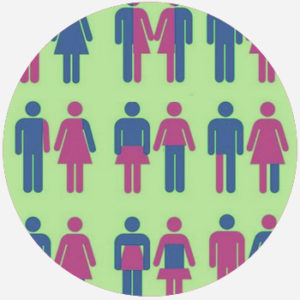 Nonbinary gender, and the related term genderqueer, emerged in the 1990s as part of growing movement within the broader LGBTQIA+ community to recognize gender identities beyond male and female. Initially this referred to anyone whose gender presentation didn’t conform to binary-gender standards, such as a woman who dresses in masculine attire. It has since shifted to focus on identity rather than on outward appearances, with an emphasis on the difference between presentation and identification. Nonbinary gender emerged as an alternative partly because of the history of the word queer being used as a slur.

I asked my tutor if he agrees that nonbinary gender is a thing and he said ‘absolutely, people can be what they want’ Fully respect the guy
abi @h_iatt, March, 2017
Then a few years ago, I saw a video from Verity Ritchie, one of my favorite YouTubers, who described their non-binary gender identity as ‘being both a boy and a girl at the same time.’
Trav Mamone, Everyday Feminism, February, 2017
Asia Kate Dillon, who plays the role of Taylor on the hit drama ‘Billions,’ stopped by ‘Ellen’ on Monday to discuss being the first non-binary gender actor to be on a mainstream TV show.
Jordan Appugliesi, ET Canada, March, 2017
SEE MORE EXAMPLES

The word nonbinary and its variants are most often used within the LGBTQIA+ community when discussing gender identity. It’s best to use it only in reference to people who self-identify as nonbinary. Using the person’s preferred gender variant (e.g., using nonbinary to refer to someone who identifies as nonbinary rather than genderqueer) is considered a mark of respect.

Since this is an umbrella term, it’s common for people to refer to themselves as both nonbinary and another gender identity, such as agender or bigender. However, some people identify exclusively as nonbinary. Nonbinary gender is generally considered to belong to the transgender identity spectrum.

Nonbinary gender most often refers to the gender itself. A person with this identity is more commonly called nonbinary.

This is not meant to be a formal definition of nonbinary gender like most terms we define on Dictionary.com, but is rather an informal word summary that hopefully touches upon the key aspects of the meaning and usage of nonbinary gender that will help our users expand their word mastery.