Proxvir is a gender created on Tumblr. It’s similar to boy and isn’t connected to the binary, standing by itself. It can be encapsulated in the phrases “boyish, but not boy” and “masculine, but not male.”

Where does proxvir come from?

Proxvir is a gender identity created by Tumblr user wulfgendur in 2016. In the blog post, they describe proxvir as “a gender relative to male, but is something separate and entirely on it’s own. it is not outside the gender spectrum. [prox from “proximus”, latin adjective for near, “vir” from masculine latin noun].”

To clarify proxvir‘s meaning, it is closer to the more established demiboy: someone who identifies as only partly male regardless of their assigned gender.

Since its creation, proxvir has been added into a community-run gender wiki, and referenced on various other Tumblr blogs. 2016 saw many people on Tumblr “creating” gender identities for themselves and for others to use. Satire website Age of Shit Lords published a long list of them in 2016; the list included proxvir.

Proxvir was added to Urban Dictionary in 2018.

There's also Juxera and Proxvir which mean the same thing but are slightly closer to female/male!!
@speedyowl152, October 2018
I prefer calling myself queer now. I never feel straight as a demiguy, and I strongly refuse to take on that label as a nonbinary person. There are also term like womasexual/romantic (attracted to women) or finsexual/romantic (attracted to femininity). Also, I will never in my life pass as male (since I don't plan on medically transitioning), so rest assured that that doesn't say anything. Oh, and I immediately thought of proxvir too! Otherwise as you mentioned there's transmasc, or demiguy as well. Or "nonbinary man".
Finn, Asexuality.org forums, August 2016: https://www.asexuality.org/en/topic/143110-masculine-but-not-male/?tab=comments#comment-1061863021 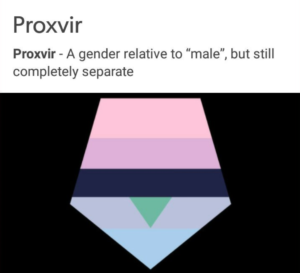 Proxvir continues to live on Tumblr and gender related blogs. There are some differences within the community as to whether proxvir lies within or outside of the gender spectrum, but it seems to be considered a nonbinary gender. As of late 2017, there’s been an increase of talk around proxvir  and its equivalent, juxera (girlish, but not girl).

im nonbinary, which means that i don't identity as a boy or a girl. the word i personally use for my gender is proxvir!

Proxvir resonates most with people who don’t consider themselves to align completely with maleness. This could mean having some feminine aspects, or being nonbinary but presenting in a way that is vaguely male.

Oh you want to call me feminine for a male? Well I already identify as proxvir anyway, thank you for noticing

This is not meant to be a formal definition of proxvir like most terms we define on Dictionary.com, but is rather an informal word summary that hopefully touches upon the key aspects of the meaning and usage of proxvir that will help our users expand their word mastery.