What does model minority mean?

The term model minority refers to a minority group or a member of such a group stereotypically viewed as being more successful than other such groups or individuals. It is most often applied to Asian Americans.

In this context, the word minority is used in the sense of “a racial, ethnic, religious, or social subdivision of a society that is subordinated in political, financial, or social power by the dominant group, without regard to the size of these groups.” The word model implies that the group should be viewed as a standard or ideal example for imitation or comparison by other groups due to supposedly being more successful.

The idea behind the term model minority is criticized as a form of stereotyping that also ignores or obscures not only the racism and discrimination that Asian Americans face but also the wide diversity among Asian Americans. It is also criticized for serving to perpetuate white supremacy and create divisions between minority groups.

Example: The article singles out Asians as a model minority, relying on the same old stereotypes about hard work and family values—as if all Asian American people were exactly the same.

Where does model minority come from? 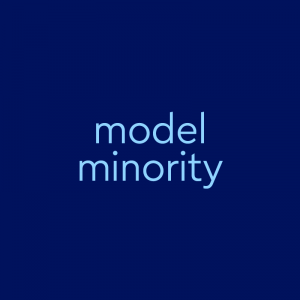 The term model minority was introduced by sociologist William Peterson in his 1966 article in The New York Times Magazine about the “success story” of Japanese Americans in the US. In the article, Peterson asserts that Japanese Americans—despite facing intense racism and discrimination (including internment during World War II)—achieved success in a way that other minority groups had not. In citing the reasons why he believes this occurred, Peterson contrasts Japanese Americans with groups he labels as “problem minorities”—those he says had failed to overcome the barriers placed on them by a racist majority.

Critics of both the term and concept cite them as contributing to what they call the model minority myth: the false but pervasive idea that all Asian American are equally economically and socially successful.

Critics also point out that selective accounts of Asian Americans’ success imply that racism and white supremacy aren’t pervasive problems—that struggles faced by other minority groups are not products of oppression but instead of a failure to do the right things needed to succeed.

As an Asian American, what it means to be a “model minority” to me is that we are expected to trade our own dignity, respect, and personal honor in exchange for money and success. All we have to do is spend our whole lives sucking up to white people in power. It’s not worth it.
@eugenegu, February 27, 2021
Unlike the engineers and doctors who mostly came from Hong Kong, Taiwan, China and India–the model minority in the American imagination–many Hmong refugees arrived from a rural life in Laos devastated by war.
Viet Thanh Nguyen, TIME, June 25, 2020

The term model minority is often used in a critical way to reject such stereotypes and other implications of the term. It is especially associated with Asian Americans.

"I think there's a misimpression of who Asians are. A lot of people call us the model minority, they don't realize that there's many Asians who live below the poverty line," Debra Wong Yang says. "We need to come together and stand together." https://t.co/LAfoRhRzAi

Asian Americans are often markedly absent from narratives about poverty and hunger, and part of what contributes to this absence is the “model minority” stereotype, which serves to obscure food insecurity within this population."@CivilEats | #TeresaMokhttps://t.co/MM44QW46f7

Tired of people stereotyping all Asians to denigrate Blacks and/or Latinos.

I declare independence from your model minority myth.

This is not meant to be a formal definition of model minority like most terms we define on Dictionary.com, but is rather an informal word summary that hopefully touches upon the key aspects of the meaning and usage of model minority that will help our users expand their word mastery.