What does Mogadishu mean?

Mogadishu is the capital of the African country of Somalia, besieged by a civil war since 1991.

Where does Mogadishu come from? 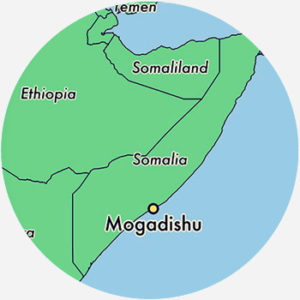 Situated on the Indian Ocean, Mogadishu, locally known as Xamar or Hamar, is a historic center of trade, commerce, and culture in the region. Mogadishu was under African and Arabic control until Italy and the UK colonized Somalia in the late 19th century. Mogadishu was established as the capital of Somalia when the country claimed its independence in 1960.

Somalia joined the Arab League in 1974, a regional confederation of Middle Eastern states, but political turmoil, assassinations, and Soviet influence eventually led to governmental collapse in the 1980s and a civil war in 1991. The United Nations sent a peacekeeping mission to restore order, and in 1992, the US military entered Somalia to attempt humanitarian aid.

In 1993, two Black Hawk US military helicopters were shot down by Somali militants over Mogadishu, and the mission to retrieve the pilots resulted in the deaths of several hundred Somali militia members and civilians as well as 18 Americans. The conflict is called the Battle of Mogadishu, more commonly known as Black Hawk Down, from the title of a book (1999) and film (2001) on the subject.

In the years since, famine, drought, and war have wracked Mogadishu, with the terrorist group Al-Shabaab seizing control of Mogadishu in 2011. Many bombings have notably blasted Mogadishu, with a truck bomb taking nearly 600 lives in October, 2017.

$600 for electricity only for one month is just ridiculous!, Mogadishu’s electricity is just out of words.
@cadow10, 2018
Hassan Adan Isaq was accused of leading an al-Shabab unit said to have carried out the truck attack in the capital Mogadishu on 14 October 2017.
BBC, February, 2018
His account, first in The Philadelphia Inquirer, then in a book and finally in a blockbuster film, gave the Battle of Mogadishu the name by which it's better known today: Black Hawk Down.
NPR, October, 2013
SEE MORE EXAMPLES

Given its recent history of war and terrorism, Mogadishu is widely discussed in political, military, diplomatic, humanitarian, and academic contexts. It’s perhaps most familiar to the average Western person for the Black Hawk Down incident depicted in the book and film of the same name. For better or worse, the city is popularly associated with extremism and terrorism.

The Mogadishu Line is a political point at which efforts to deliver aid to an area move from humanitarian to combative (i.e,. crossing the Mogadishu Line by sending in soldiers). This term was coined in the 1990s after the UN’s unsuccessful missions in Mogadishu.

Thanks to the chaos and violence besetting the city in the past several decades, Mogadishu is occasionally used as a slang shorthand for a bad, difficult, or messy situation (e.g., this situation has gone all Mogadishu on us). The comparison, however, is considered insensitive.

Mogadishu is also the title of a 2011 award-winning play by Vivienne Franzmann, about the relationship between a white teacher and a black student.

This is not meant to be a formal definition of Mogadishu like most terms we define on Dictionary.com, but is rather an informal word summary that hopefully touches upon the key aspects of the meaning and usage of Mogadishu that will help our users expand their word mastery.