Feedback
Previous What Makes "Passover" A Day Not To Overlook? Next What Do ™ , ® , © , and ℠ Mean? Decoding Trademark Symbols

Every spring, the skies explode in bursts of color as people around the world celebrate the Hindu holiday Holi.

Friends, family, and strangers alike gather together to joyfully toss brightly colored powders, water, and water balloons, and it doesn’t take long for revelers to be covered in color from head to toe, and the streets to become a wild haze of blue, yellow, red, and green. It’s quite the eye-catching ceremony—which is why it’s sometimes known as the Festival of Colors.

Holi is more than a simple colorful party at the start of spring, however. It’s connected to legends of fire, love, and good vs. evil.

Holi is the Hindu spring festival that lasts for two to five days. It’s perhaps best known for the powders thrown over people who are celebrating. Though it originated in India, large Holi celebrations take place in other countries with Hindu populations as well, including the United States, the United Kingdom, Australia, and Germany.

The original spring festival appears in ancient mythologies that date back thousands of years. Texts like the Purva Mimamsa-sutras, Kathaka Grihya-sutras, Narada Purana, and Bhavishya Purana—some of which date back to 200–300 BCE—have descriptions of a colorful springtime celebration with a general theme of good triumphing over evil. Over time, however, Holi has come to be associated with a couple of legends in particular.

The English name dates back to the early 1900s and comes from the ancient Sanskrit word Holikā (Holī in Hindi). Holikā is the name of a demon in the seventh century story Ratnaval.

According to legend, king Hiranyakashyap required his subjects to worship him and him alone. His son Prahlad, however, was faithful to the god Vishnu. Hiranyakashyap instructed his sister, Holikā, who was impervious to fire, to take Prahlad into a fire and burn him to death. Yet she found out the hard way that her powers had limits. Because she’d chosen to harm her brother, Holikā was burned to death while Prahlad was saved by the gods for his devotion.

Other legends are woven into the celebrations as well, including the love story between the god Krishna and Radha, a milkmaid who became his consort. According to legend, Krishna has blue skin because as a child he drank milk poisoned by a demon. Krishna was worried that Radha, who did not have blue skin, wouldn’t feel comfortable with the difference, so he painted her body.

Holi is pronounced like the English word holy. The two words are homonyms, meaning they sound alike but different meanings.

As you imagine the colors rising up all around you, visit this article on another pair of homonyms: ascent and assent.

Holy means “specially recognized as or declared sacred by religious use or authority; consecrated.” While it’s true that both holy and Holi have some similarities in that they’re connected to sacredness and religious stories, the two words are not etymologically related.

The date of Holi each year is set on the Hindu calendar, which is a lunisolar calendar. This means that, like other religious observations based on lunar or lunisolar calendars, it can fall on a range of days on the Gregorian calendar followed by most of the Western world.

Holi starts on the day of the first full moon in the month of Phalgun. On the Gregorian calendar, this can be in either February or March.

How do people celebrate Holi?

Early versions of the celebration centered around Raka, the goddess associated with the full moon, and married women would note the occasion with prayers for their family. Today, Holi is a celebration for everyone regardless of caste, gender, or age.

The first night before Holi is called Holika Dahan and is marked by bonfires in reference to the story of Holikā walking into the fire. The bonfire and a puja (prayer) destroys the evil around them. 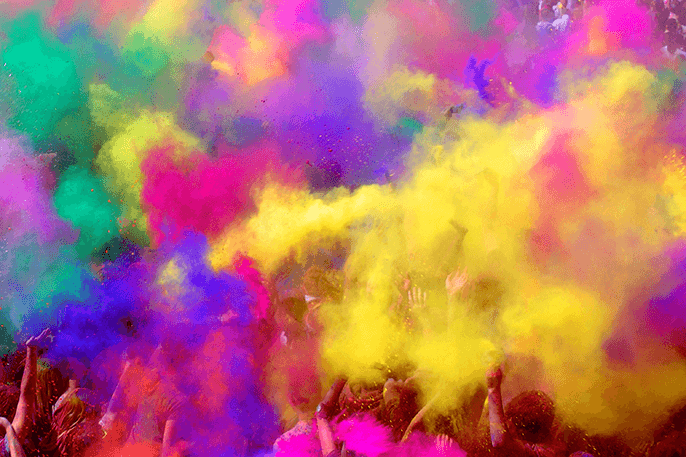 The following day, the Festival of Colors, is called Rangwali Holi. This is the day that the streets are filled with people and the colors fly. It’s believed to be based on the story of Krishna painting Radha’s body. But blue isn’t the only color involved. People take to the streets with yellow, red, blue, and green powders and colored waters. Each color has meaning:

Any passerby is fair game when it comes to targets for the powders and waters. Aside from the colors, there’s plenty of dancing and singing as well.

In between the fun, people enjoy traditional food and drinks. Yogurt drinks and sweets mixed with bhang, an edible cannabis mixture spiced with cinnamon and other spices, are common throughout the day.

The party stops near the end of the day, though the colors (and the memory of the event) may take a day or two to clean up.

Give your yoga practice the respect it deserves (after all it's done for your health!) by learning the Sanskrit words for your favorite poses.

Previous What Makes "Passover" A Day Not To Overlook? Next What Do ™ , ® , © , and ℠ Mean? Decoding Trademark Symbols
RELATED POSTS

Home / Education / History / What Makes Holi The Most Colorful Event Of The Year?