What does Baby Yoda mean?

Star Wars Day, Shmi Skywalker, skywalkers, Darth Plagueis, It’s a trap, May the Fourth be with you, Padawan

Where does Baby Yoda come from? 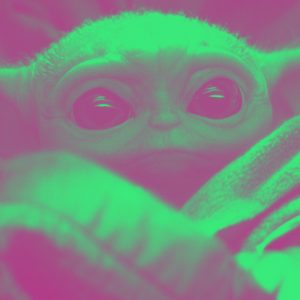 For many, the fictional character of Yoda needs no introduction. But just in case you’re unfamiliar, Yoda is a small, green, human-like alien creature in the Star Wars universe. He has large ears, wears a brown robe, and is 900 years old. Yoda first appeared in the 1980 film The Empire Strikes Back. In Star Wars, Yoda is a powerful, wise, and very old Jedi master who mentors Luke Skywalker.

Baby Yoda comes from a new series in the Star Wars franchise, The Mandalorian, which first aired on Disney’s streaming service, Disney+, on November 12, 2019. The show follows a bounty hunter (from the planet Mandalore) on his perilous adventures. The first adventure involves tracking down a target for assassination. The target is 50 years old, but, due to the differing aging patterns of species in Star Wars, it’s not an adult: it’s a child, a child of the same alien species as the iconic character Yoda.

The character is created using sophisticated puppets enhanced with computer-generated imagery. While simply known as the Child in the show, viewers rapturously greeted the new character, whom they dubbed Baby Yoda immediately after The Mandalorian aired.

Like Yoda, Baby Yoda is small, wears a robe, and has large, pointy ears. But, Baby Yoda has even bigger eyes and is extremely cute—and, yes, is utterly adorable. Note, though, that Baby Yoda isn’t infant version of Yoda himself; it’s a different, younger member of the same, mysterious species.

got to work 2 hrs early at 6:30 am so I can leave early... let’s just say it took me a while to wake up and reach for that first cup of coffee #babyyoda #helpme
@nickromero3216, December 2019
Part of what made Baby Yoda a phenomenon was that he did not feel imposed from above — “Baby Yoda” is our name, not Disney’s — and his character, his place in the year’s pop vocabulary, was created as much by the fans smithing online memes as it was by the show itself.
James Poniewozik, New York Times, December 2019

Baby Yoda is a meme force of nature, applied flexibly in many situations and to various effects. Image macros, reaction images, parody accounts, fan art, GIFs, and general internet squeeing have all exploded around Baby Yoda.

One popular meme has become known as Baby Yoda Drinking/Sipping Soup. It features an image of Baby Yoda, looking cozy in its robe, drinking a large cup of soup. This image has been used as a reaction image to comment on various humorous situations, especially where one might be snugly observing something.

Every Mom on Christmas morning watching you open presents: pic.twitter.com/m7hI1qYoVz

Other memes have photoshopped various images or messages in place of Baby Yoda‘s soup.

Me even when it's 33 degrees outside. ❄️ #babyyoda pic.twitter.com/O6rUHL7aTG

Another popular meme compare images of Baby Yoda and Yoda to make jokes about aging or undergoing trying experiences.

Other memes riff on fun moments in the show or just generally embrace Baby Yoda‘s cuteness.

I have uncovered the best baby Yoda pic pic.twitter.com/hLYgAxPthT

a thread of brie larson as baby yoda pic.twitter.com/kE5ywlB238

Even the likes of Elon Musk have gotten in on the Baby Yoda fun.

This is not meant to be a formal definition of Baby Yoda like most terms we define on Dictionary.com, but is rather an informal word summary that hopefully touches upon the key aspects of the meaning and usage of Baby Yoda that will help our users expand their word mastery.