What does Darude – Sandstorm mean?

Darude – Sandstorm is a memed response people jokingly provide online whenever someone asks for the name of a particular song or other media title. It alludes to “Sandstorm,” the title of a popular song by DJ Ville Virtanen, whose stage name is Darude.

Where does Darude – Sandstorm come from?

In 1999, Finnish DJ and music producer Darude released a hit techno song called “Sandstorm.” The epically upbeat song went on to be used in film, on television, and at sporting events, but it also gained massive popularity as the background music gamers chose to set their playthrough videos to.

In 2007, the YouTuber GameStream played “Sandstorm” as background music for gameplay footage of Call of Duty 4: Modern Warfare. While not the first to pair gaming footage with this song, this video garnered millions of views, and “Sandstorm” soon caught on with other gamers.

The song was especially widespread on Twitch, a live-streaming video website. In chats on the site, viewers often ask gamers the name of the song playing behind their video. The answer Darude – Sandstorm became so common that by 2013 users were giving it as a generic response for all songs.

When Darude - Sandstorm comes on in any twitch stream it literally makes my day. The chat blows up.
@ArtillerySr, December 20, 2013
'There is only one song on this earth- Darude Sandstorm'
@kimlesno, March 17, 2017
Even on my own YouTube channel, I might have answered a couple times 'It is Darude - Sandstorm, it's in the description' you know? And I probably got a couple of smirks because, y'know, I fell for it!
Darude (Ville Virtanen), “Darude on Making the Only Song in eSports,” Red Bull, April 2, 2015
SEE MORE EXAMPLES

The joke has jumped from gaming communities to become a meme in broader internet culture. 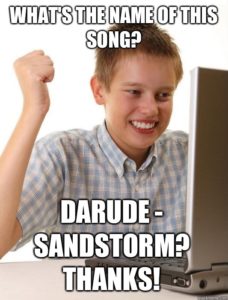 As a nod to the meme, on April Fools’ Day 2015 YouTube added a button to its videos that allowed viewers to play Darude’s “Sandstorm” over whatever video they were watching. Extending the prank, YouTube also responded with “Did you mean: Darude – Sandstorm by Darude” after every search on its site.

While largely used as a harmless in-joke on the internet, Darude – Sandstorm is sometimes used as a very mild way of trolling people who earnestly want to find out the name of a song or other title (like the name of a film). This meme is especially used to tease posters who solicit titles by asking questions with vague musical approximations like: “What’s the song that goes DOO DOO DOO DEE DUH DOO DOO?” Sometimes the answer will also be an intentional misspelling or wordplay on Darude – Sandstorm, such as Dardune – Sandstorm, eatglue – sandcorn, and Explude – Bombstorm.

This is not meant to be a formal definition of Darude – Sandstorm like most terms we define on Dictionary.com, but is rather an informal word summary that hopefully touches upon the key aspects of the meaning and usage of Darude – Sandstorm that will help our users expand their word mastery.